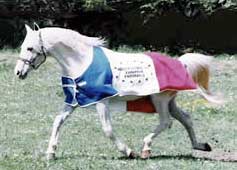 One of the most famously hard rides in Europe will take place tomorrow in southern France for the 30th time: the 160-km Florac. It is also the pre-ride for next year's European Championship. This region of The Cevennes is known as "Persik's Land" - named after the famous endurance Arabian stallion and sire Persik, who was the only horse to win Florac twice, in 1975 and 1976.

The course is one big loop over 6 stages, beginning at Ispagnac at 500 meters (1600 ft), travelling through the Cevennes National Park, climbing to Mont Aigoual, at 1567 meters (5141 ft) and eventually returning back to Ispagnac for the finish.

The start is tomorrow morning at 4 AM.

Persik the day after winning Florac in 1976

- Merri Melde
By Endurance.Net - September 10, 2010
Email ThisBlogThis!Share to TwitterShare to FacebookShare to Pinterest