Training Camp Trials and Tribulations: the Guts and the Glory

The Derby proper begins when the start gun fires on Day 1 of the race, but there’s an entire universe of events leading up to that moment. Once the riders have made it to Mongolia, with or without their gear, Start camp is the next stop and the first exposure to the realities of this race for the majority of these brave souls. Start camp is where you first get on a horse. Start camp is where you test your kit, test your mettle, and where the steppe tests you in return.

Outlaw Kate (Katherine Friedley) ~ “It was the first day of on-the-steppe rider training and I was both excited and extremely nervous about what was to come. I’d met up with a few of the riders back in UB and I was suffering from the worst case of imposter syndrome imaginable: there were the race-horse-riding girls from Dubai, the polo-playing rich-looking dudes from the UK, and horse trainers and horse traders from all corners of the globe, all of whom seemed more nonchalant about the coming race than me. I was 47 years old and on the upper end of the age scale in comparison to the majority of the riders and definitely feeling out of my league. What was I doing here? But there was literally nothing I could do about my misgivings at that point except to cowboy-up and put on my game face.

I will forever remember my first training ride and settling on my first horse – a cooperative-looking dun with a dorsal stripe. I will also forever remember hitting the ground an hour later, doing around 20km/hr across the steppe in a race mock-up with Julie Youngblood...

By Endurance.Net - August 30, 2020 No comments:
Email ThisBlogThis!Share to TwitterShare to FacebookShare to Pinterest

Australia: Tom Quilty gets the go-ahead for 2021

NO matter how carefully a project is planned, something may still go wrong with it.

It is with great disappointment and regret that the Tom Quilty endurance horse ride, due to be held in Collie in September, is to be postponed due to the repercussions of COVID-19.

The good news is that following two months of negotiation, the ride will be held on October 1-3, 2021, at Collie.

New South Wales was due to hold the event next and had had significant preparations in place - that event will now be held in 2022...

By Endurance.Net - August 29, 2020 No comments:
Email ThisBlogThis!Share to TwitterShare to FacebookShare to Pinterest

Chlumec nad Cidlinou, is a small old city in lowlands close to the highway between Prague and Hradec Kralove, almost in the centre of Czech Republic. Close to it is a 200 years old stud “Ostrov”, home of the Kinsky horses, and host of the very first endurance event in history. All surroundings are still owned by the Kinsky dal Borgo family and thanks to their kindness it was possible to organise an endurance ride in cooperation with the Czech equestrian federation and several sponsors.

Despite the short time for preparation of the event due to the Covid pandemic, the organiser managed to make a comfortable base for all participants. Luckily the Covid situation in Czech Republic was not too bad and with some hygiene measures green light was given for this event...

By Endurance.Net - August 25, 2020 No comments:
Email ThisBlogThis!Share to TwitterShare to FacebookShare to Pinterest

Welcome to our recap of some of the best/worst/most memorable moments of the Derby over the past decade. We’ll get into the nitty-gritty of this mind-blowing race with stories from many years, many riders, and many angles. What happens when a rider turns up in Mongolia but their carefully curated-and-tested-to-oblivion gear doesn’t? What really goes on at start camp? What goes on behind the scenes? What’s this all about? Stay tuned over the coming days to find out the answers to these questions and much, much more.

Where it all started, way, way back when:

Ever heard the term “Packing the Mail”?

The mighty Mongol Derby is a recreation of Chinggis Khan’s empire hustling supply routes. Örtöös (check points) were manned by nomadic families who lived along these routes and provided food, shelter, and fresh horses for the Mongolian army messengers. The Mongolian army was famous for traveling at high speeds atop their tough-as-nails horses, so these messengers needed to be faster. Urgent messages were known to travel at speeds of 200–300 kilometers (120–190 mi) per day...

By Endurance.Net - August 21, 2020 No comments:
Email ThisBlogThis!Share to TwitterShare to FacebookShare to Pinterest

An 18-year ban for abuse, exposure to CAS and dilemmas over the WEC keep endurance in the headlines during the Covid hiatus.

An endurance friend recently asked if I was ill, as I haven’t blogged about their sport for months. While pointing out that I write about other horse sports too, I checked and it’s true! No lengthy endurance blog since February.

Alas, it hasn’t needed me to keep endurance in headlines. Despite ride cancellations in the pandemic, endurance has continued to attract attention, for all the wrong reasons.

In June, the 18-year FEI ban on a sheikh for horse abuse was reported in the global media. The likes of Yahoo Sport, Associated Press and Eurosport don’t usually cover endurance. They still might not know what endurance is. But when a governing body sends you a graphic press release about animal abuse and a 18-year ban, you twig that it must be Very Serious Indeed, and so give it some prominence.

That case involved Sheikh Abdul Aziz Al Qasimi, a member of the ruling family of Sharjah, UAE. It confirmed FEI suspicion that nerve-blocking is routine in certain stables, with resultant orthopaedic weaknesses being fractures-in-waiting...

By Endurance.Net - August 17, 2020 No comments:
Email ThisBlogThis!Share to TwitterShare to FacebookShare to Pinterest

The opening day will feature the first international endurance qualifiers, covering a distance of 100km and a local 40-80km qualifying race.

By Endurance.Net - August 17, 2020 No comments:
Email ThisBlogThis!Share to TwitterShare to FacebookShare to Pinterest

and much more at:
https://issuu.com/arabianhorseintl/docs/endurance_international_2020

By Endurance.Net - August 14, 2020 No comments:
Email ThisBlogThis!Share to TwitterShare to FacebookShare to Pinterest

A spokesperson for Endurance GB said:...

By Endurance.Net - August 12, 2020 No comments:
Email ThisBlogThis!Share to TwitterShare to FacebookShare to Pinterest

THE Irish Long Distance Riding Association (ILDRA) held their first event since the start of lockdown at the much-loved and beautiful venue of Shane’s Castle, Antrim on Sunday, July 26. Under the new normal, a range of COVID protocols had been introduced prior to this ride, including the requirement of all riders to pre-enter and a restriction of the numbers of riders able to ride together on the day. All of the organising committee at ILDRA would like to thank the attending riders for the adherence to the new guidelines and their ongoing support.

Riders (and their horses!) enjoyed seeing old friends (socially distanced, of course) and reuniting after several months apart. All of those attending on the day enjoyed riding around the scenic trails in the Shane’s Castle Estate and into Randalstown Forest Park, where deer and buzzards could be spotted...

By Endurance.Net - August 11, 2020 No comments:
Email ThisBlogThis!Share to TwitterShare to FacebookShare to Pinterest

It’s August and for some of us, it’s that time of year when we’re glued to our social media feeds following that 1,000 kilometer jaunt across Mongolia—the Mongol Derby. As with many events this year, COVID-19 forced the organizers to postpone the 2020 edition of the world’s longest and toughest horse race. Next year they’ll run two races—one in July and one in August. That means the summer of 2021 will be Mongol Derby all day every day.

By Endurance.Net - August 07, 2020 No comments:
Email ThisBlogThis!Share to TwitterShare to FacebookShare to Pinterest 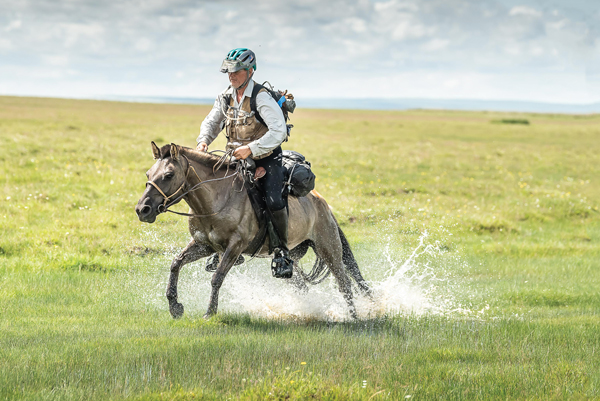 At 70, Robert Long became the oldest rider to win the 600-mile Mongol Derby this year.

To win the world’s longest horse race, Robert Long employed equal parts preparation and smarts. In August, the 70-year-old became the oldest winner of the Mongol Derby, which involves racing more than 600 miles across the Mongolian Steppe, recreating Genghis Khan’s horseback messenger system of the early 1200s. Riding approximately 12 hours each day for eight days, Long beat out 41 top riders from around the globe.

Endurance riders make up most of the Mongol Derby crowd, but Long—more of a cowboy—grew up in Wyoming and lives in Idaho. As a kid, he worked cattle and went on horse-packing hunting trips with his family in the Yellowstone-Tetons area. Competition wise, ranch horse versatility is his main sport. It involves ranch riding, ranch trail, ranch reining, ranch cow work and ranch conformation. Long has started many competitive horses for the sport.

So what prompted this cowboy to join the endurance riders a world away?...

TomQuilty2022.com All Trails Lead to Tooraweenah in 2022 Tooraweenah! It’s a small, serene little village of a few hundred hardy souls,...