Spain: Valencian Junior Championship and other races in Ademuz

It was the second international competition of the Ademuz 2021 season. 45 combinations competed over 100km and 120km.

The focus for the CEIYJ1* 100km was the Valencian Junior Championship, with a total of 11 young local riders competing for the title. For the first two loops the main group of riders remained together, with an average speeds of 18-19km/h and no clear leader. During the last loop Marina Villalba on Natur Gabo went out in first position, with Nacho Garcia on BJ Noviembre half a minute behind. As the total 100km distance was split into three loops the last 30km loop was long enough for all to change the standings. Initially going out in 8th place at start of the loop, with almost a 4-minute difference from the lead, Lucia Navarro and Amin Al Zaraq came in a clear minute ahead of the trailing group. Martina Madrid on Fraile, Marina Villalba and Carmen Rojo de Miguel on Favorita of Gredos, fought it out for second, third and fourth place with a high-speed sprint finish over the last kilometre. Fraile took his rider, Martina Madrid to the podium for the second consecutive time in Ademuz with second place, leaving Marina Villalba and Carmen in third and fourth place respectively. The average speed for all riders completing the distance was around 18-20km/h...

Nikita Gretsi, equipped with a special high-tech suit to keep out the bone-chilling cold of a Russian winter, has embarked on a remarkable 14,100km ride on a hardy Yakutian horse across Eurasia.

Gretsi has left the Pacific coast of Russia on a route that will take him to the Atlantic coast of Europe, then on to London.

The founder of the Long Riders’ Guild, CuChullaine O’Reilly, has characterized Gretsi’s ambitious ride as The Last Great Journey...

Many 120km endurance rides in the desert will have to run under FEI rules in future, unless organisers drastically reduce the number of foreigners invited.

A loophole that allowed organisers to side-step FEI rules at numerous high-profile endurance rides for over a decade is finally being closed. The FEI board has resolved to remove 2* senior endurance events from the category of “Minor” events (CIMs), to be rubber-stamped at the FEI General Assembly next month in Antwerp, Belgium.

High-profile races will be particularly affected in the UAE, the country at the centre of so many welfare, doping and cheating scandals. They include the Al Reef Cup in Abu Dhabi where Splitters Creek Bundy broke both forelegs in 2015. That grotesque incident exposed the FEI to a barrage of criticism when it initially responded that the ride’s categorization gave the FEI no jurisdiction.

If the UAE wishes to involve a large international field in its 120km and other 2* races in future, all must either run under FEI rules, or drastically reduce the number of foreigners invited...

The FEI Tribunal has issued its Final Decision in the case against Ahmed Ali Mohammed Allay Al-Naqbi (FEI ID 10114817/UAE) for alleged abuse of the horse F S Don Juan FEI ID 104SN64/UAE ) at the CEI1* 100km at Al Wathba (UAE) on 8 December 2018. The case was opened by the FEI following a protest lodged by a third person.

Video footage showed the athlete repeatedly kicking the horse and flicking the reins from one side of the neck to the other. As this caused the horse unnecessary mental and physical discomfort, this constituted an Abuse of the Horse as per Article 142 of the FEI General Regulations.

The athlete has been suspended for six months from the date of the decision (22 October 2021) and was also fined CHF 1.500 and asked to pay costs of CHF 500. The results of the athlete/horse combination at the event have been disqualified.

The full Decision is available here.
By Endurance.Net - October 26, 2021 No comments:
Email ThisBlogThis!Share to TwitterShare to FacebookShare to Pinterest

The trainer was not able to establish how the Banned Substance entered the system of each horse.

In its Final Decision, the FEI Tribunal imposed a three-year suspension on the trainer, deeming that, the same trainer having two horses testing positive at the same event, constituted aggravating circumstances. The period of the provisional suspension of the trainer, which came into effect on 13 January 2020, shall be credited against the period of ineligibility, meaning he will be ineligible until 12 January 2023. The trainer was also fined CHF 7,500 and asked to pay costs of CHF 2,000. The FEI Tribunal also disqualified both athlete and horse combinations from the event.

The full Decision is available here.
By Endurance.Net - October 20, 2021 No comments:
Email ThisBlogThis!Share to TwitterShare to FacebookShare to Pinterest

CEI 1* and 2* rides over 100km and 120km for seniors and young riders/juniors took place for the first time at the Biohof zu Mühlenberg in Trechwitz in the state of Brandenburg located not far from Berlin.

The CEI rides in Trechwitz were new rides along forest and field tracks in a beautiful region of Brandenburg which included part of the National Park Rietzer See. As the riders were on the first loop they were accompanied by the cries of thousands of wild geese, that rose into the air as they went by the lake. Quite a new experience on a ride! This loop also included a metal bridge which, despite being covered with a carpet and wood shavings, was not always the easiest to cross for the horses. However this was managed without too much difficulties.

After Covid and with the FEI Herpes Requirements, riders were eager to start, finish and qualify on these new FEI rides. Riders and horses came from the Czech Republic, Germany, the Netherlands and Poland...

By Endurance.Net - October 15, 2021 No comments:
Email ThisBlogThis!Share to TwitterShare to FacebookShare to Pinterest

UAE trainer is suspended for four years after revealing banned Tridenosen is routinely kept on the premises.

The FEI has strongly criticized the routine and unsupervised use of medications by a leading UAE endurance stable during an anti doping hearing by the FEI Tribunal. A four-year ban has been imposed on trainer Abdul Kader Abdul Sattar, who has previously been suspended for a steroids offence, with rider Omar Ibrahim banned for two years. Their “often” lame Kassidy de Jansavis tested positive to Diisopropylamine during the CEI 2* 120km ride at Bou Thib, Abu Dhabi, in November 2019.

The source was Tridenosen, which is “commonly” used to relieve tying-up at Al Maghaweer Stables, along with Tripart supplement which does not contain prohibited substances.

In response to claims of a mix-up by a technician, the FEI said procedures at Al Maghaweer Stables had been demonstrated as “insufficient and erroneous.”

The FEI said: “Al Maghaweer Stables advertise themselves as ‘7-star endurance stables.’ Therefore, the FEI believed one should first and foremost ask a question why the product Tridenosen, of which [Sattar] as well as the veterinarians know contains a Prohibited Substance, is kept on the premises of such stables and apparently used routinely...

By Endurance.Net - October 12, 2021 No comments:
Email ThisBlogThis!Share to TwitterShare to FacebookShare to Pinterest

More on that one here:
https://inside.fei.org/media-updates/fei-tribunal-issues-final-decision-equine-anti-doping-case-3

The athlete was not able to provide any explanation as to how the Banned Substances entered the horse’s system.

More on that oe here:
https://inside.fei.org/media-updates/fei-tribunal-issues-final-decision-equine-anti-doping-case-4

By Endurance.Net - October 12, 2021 No comments:
Email ThisBlogThis!Share to TwitterShare to FacebookShare to Pinterest

Often billed as an end of season party, the iconic British Horse Feeds & Golden Paste Company Red Dragon Festival of Endurance was back for the first time since 2019 featuring an array of Endurance GB’s National titles.

The Red Dragon ride, which sets off from the Royal Welsh Showground in Builth Wells, is seen as a bucket list event for most endurance riders. This year’s track offered firm going and in places, slippery grass tracks, which in humid conditions needed careful navigation.

Just 4.5km from the start, the Red Dragon route takes riders over the legendary feature climb over the 400-metre Aberedw Hill. After tackling this, competitors are led out onto a spectacular grass covered plateau and onto mountain trails...

By Endurance.Net - October 05, 2021 No comments:
Email ThisBlogThis!Share to TwitterShare to FacebookShare to Pinterest

Spending up to 13 hours on horseback wouldn’t sound enticing to most, but endurance riding is a passion for young Tahlea Lochtenberg, and she has proven time and time again that she is one of the best in the sport.

The 16-year-old has won three endurance competitions in recent weeks, following in her family’s footsteps.

Tahlea recently competed in the Kholo, Mt Larcom and Biggenden endurance rides and with the help of her horse Matta Mia Kassanov, successfully placed first in all three events.

“It was very hilly and it was hard work for the horses but we train in the Imbil forestry and our horses are used to big hills so I think we had an advantage at that ride.

“The riders were very competitive and I was so proud of my horse for pushing hard to win...

By Endurance.Net - October 03, 2021 No comments:
Email ThisBlogThis!Share to TwitterShare to FacebookShare to Pinterest

Scotland on Sunday Travel: The Gaucho Derby gallops through Patagonia 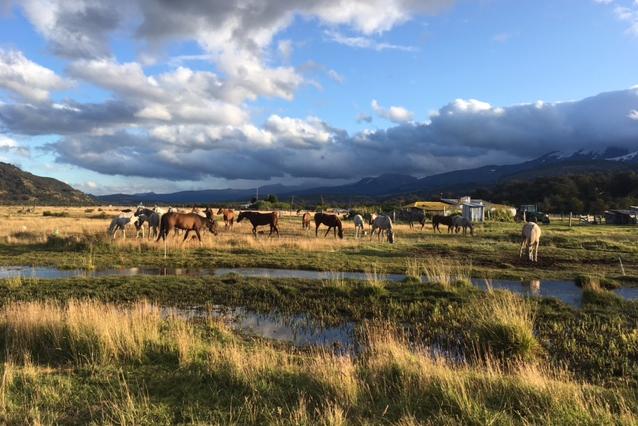 Saddle up for the world’s toughest horse race

The noon bugle in the clear Patagonian air released the cavalry charge. To the west, the snow covered Andean peak of San Lorenzo beckoned two dozen riders chosen for their intrepid personalities and equestrian skills.

They surged out over the scrub, each with two horses, one to ride and one to carry bright orange bags stuffed with fodder to see them through the first 80km stretch. Within a minute, one of the Americans was on the ground, trying to control two frantic animals as she re-balanced her kit. Half an hour later, as we sat down to local ostrich grilled on an open fire at La Perserverancia, the aptly named Argentinian ranch where we were based, a horse galloped into the corral. Followed a little later by the rider. The world’s toughest horse race was on its way.

The inaugural Gaucho Derby narrowly beat Covid-19 to the starting blocks in late February 2020. By the time it was over, it was hard to get home but those who were there had a dramatic lockdown story to sustain them The race was the brainchild of Tom Morgan, owner and founder of The Adventurists, a travel company that takes its clients to the edge. It was a spin off of his Mongolian Derby, first run across the steppe in 2009, now a must do for any ambitious endurance rider over 18...