Bahrain gear up for juniors horseride

PREPARATIONS are in full swing to host the World Juniors Endurance Horseride Championship on December 8 at the Endurance Village premises in Sakhir.

The event will be organised by the Bahrain Royal Equestrian and Endurance Federation (Breef).

Shaikh Daij said there will be additional stables included at the village to house over 120 horses in addition to a veterinary clinic, a registration office and towers especially designed to hold the television cameras.

Other facilities include a modern cafeteria and seats for spectators and a media centre.

Shaikh Nasser paid a visit to the village and inspected the facilities available.

Meanwhile, the championship's organising committee chairman and the General Organisation for Youth and Sports president Shaikh Fawaz bin Mohammed Al Khalifa yesterday chaired a committee meeting and reviewed latest preparations being made to organise this event.

The sisters, the daughters of Ken and Sharon Perry have been successful members of the Irish endurance squad but have now received their licences and in future will be competing for Great Britain.

Suzanne said that although it would be more difficult to qualify for events because of the higher class of rider, she hoped the change would mean they had more support and better competition opportunities.

The girls are aiming to represent Britain at the International Championships later this year at Bahrain. Both are consistent on the world circuit with Suzanne competing regularly in the Middle East and having sold two of her Arab horses to the defence minister Sheik Mohammed Al Maktoum of Dubai.

The Perry family run an extensive Arab breeding programme at Dromore where their international endurance horses are kept fit in a daily routine by Suzanne and her mother Sharon who are full-time in the sport.

Helen has had particular success in the last few weeks having had two major wins in England.

Last weekend Helen, in 28 degrees heat won the three-star 122km endurance race in Cirencester with her stallion Metallica. This was a hectic finish where Helen galloped to the last.

Mrs Perry, said: "The girls are delighted to have both received their licences and are now aiming towards European and world championship selection. Their successes in England have been well noted by selectors and they are looking forward to serious competition."

Suzanne said: "We have been thinking about changing to Great Britain for some time and are both delighted to have received our FEI licences to compete."
By Steph - June 26, 2005 No comments:
Email ThisBlogThis!Share to TwitterShare to FacebookShare to Pinterest

[More ...]
By Steph - June 21, 2005 No comments:
Email ThisBlogThis!Share to TwitterShare to FacebookShare to Pinterest

Veritas and IBM have firmed up their ties with a new reselling agreement that will see Big Blue ship some of Veritas' better known software products with its servers.

In particular, IBM will resell the Veritas Cluster Server product and the Storage Foundation product - which includes Veritas' file system and volume manager. These software packages will be promoted alongside IBM's Xeon-based servers and its fleet of Xeon- and Opteron-based blades. IBM hopes to target customers running Red Hat or SuSE Linux and Microsoft's Windows operating systems with the reselling deal.

"We believe the Veritas products will add value to what already is one of the most robust, reliable and available x86 server lines on the market, and also help make it easier for our mutual customers in their server consolidation efforts to Linux and Windows on xSeries and BladeCenter servers," said Jim Northington, a VP at IBM.
By Endurance.Net - June 20, 2005 No comments:
Email ThisBlogThis!Share to TwitterShare to FacebookShare to Pinterest

It was a day full of surprises. The fact, that in the evening the corks popped in the camp of the new German Champion Melanie Arnold could have been forseen (see "Three questions for Melanie Arnold") whereas the victory of the Belgian outsider, Liesens with Arazzi, ahead of French rider Raphael Muller was completely unexpected. Liesens reached the finish at the show grounds in the Aachener Soers 13 hours and 39 minutes after the 5 am start.

[More ...]
By Endurance.Net - June 14, 2005 No comments:
Email ThisBlogThis!Share to TwitterShare to FacebookShare to Pinterest

Entrants in the 50 were 52 starters with 37 finishers. Winning time was
4 hours 41 minutes

By Endurance.Net - June 13, 2005 No comments:
Email ThisBlogThis!Share to TwitterShare to FacebookShare to Pinterest

By Endurance.Net - June 13, 2005 No comments:
Email ThisBlogThis!Share to TwitterShare to FacebookShare to Pinterest 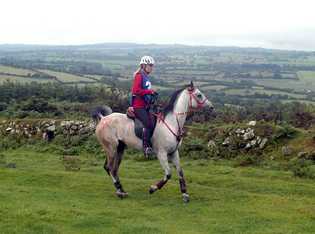 History in the making.

The ride started at midnight in steady rain, and as dawn broke conditions deteriorated. In driving rain, and cold winds, the horses began to find the going difficult, and there were several falls, fortunately with no injuries.

The advance motorcycle trail bike crew were unable to access parts of the fourth leg , and the four wheel drive vehicles were unable to establish checkpoints, or to access the track for safety and rescue work .

Faced with a deteriorating situation on the local weather radar, and many withdrawals at the end of the third leg , the organisers made the courageous decision to end the ride.

Horses already out on leg 4 were recalled as they approached the checkpoints. All horses who had completed the third leg (110k) were deemed to have completed ,as long as they passed the compulsory two hour represent to the vet panel.

The leading horses in each division, at the end of leg three, will be declared as winners.

Toft endurance has provisionally swept the prize pool, although no official results have yet been announced.

[More ...]
By Steph - June 11, 2005 No comments:
Email ThisBlogThis!Share to TwitterShare to FacebookShare to Pinterest

THE Tom Quilty Gold Cup event has proven beyond a doubt that Australian horses are as tough as any in the world, according to event patron Ron Males.

Mr Males has been involved in the cup, which is now the national endurance riding championship, since its inception 40 years ago.

He worked with R. M. Williams and Tom Quilty in setting up the inaugural ride in 1966.

R. M. Williams wanted a race to see if Australian riders and their horses were as tough as American competitors in the 100-mile Tevis Cup.

Tom Quilty put up 1000 in prize money and Mr Males organised and marked out the course.

Mr Males has since competed in 21 events and holds the record for the most consecutive Tom Quilty silver belt buckles.

They are awarded on completion of the event within 24 hours.

"It's hard to think of a highlight," Mr Males said.

"But that first race, it was out of this world.

"Racing in Australia over 160 kilometres, which is 100 miles, was just unreal.

"But we did it, we succeeded."

Sheffield is the site of this year's Tom Quilty, which begins at midnight tomorrow.

It is also the site of another of Mr Males' personal highlights.

"Eighteen years ago at Sheffield I came in second on Chase Sadaqa and we won best condition, which is as prized as winning," he said.

"I've only just arrived, but from what I've seen this year's course looks great."

VETERAN: Tom Quilty Gold Cup patron Ron Males relaxes after arriving in Sheffield yesterday. Mr Males was involved in the establishment of the event 40 years ago and has 21 Quilty silver buckles. Picture: Karleen Williams.
By Steph - June 09, 2005 No comments:
Email ThisBlogThis!Share to TwitterShare to FacebookShare to Pinterest

Twelve of the 28 riders will take part in the team race while the rest will be participating in the individual event. The 12 riders are still to be announced.

Riders rug up for Quilty event

Deviot's Jess Wilson will mount her Crabbet Arabian Kurrajong Zephyr just before midnight on Friday ready to ride into the freezing hills of Sheffield.

The 12-year-old mare, which Wilson has owned for less than a year, will be wearing a light all-purpose saddle, a simple bit or maybe even just a headstall, and her lightweight rider will be in thermal underwear "and at least five jumpers and a coat".

Both will be a little jumpy, breathing steamy nervous breath in the cold, night air.

And then, almost silently, they will trot away into the night, with just a head-torch to guide their way, on the first leg of the 160km journey that is the famous Tom Quilty Gold Cup Endurance Ride.