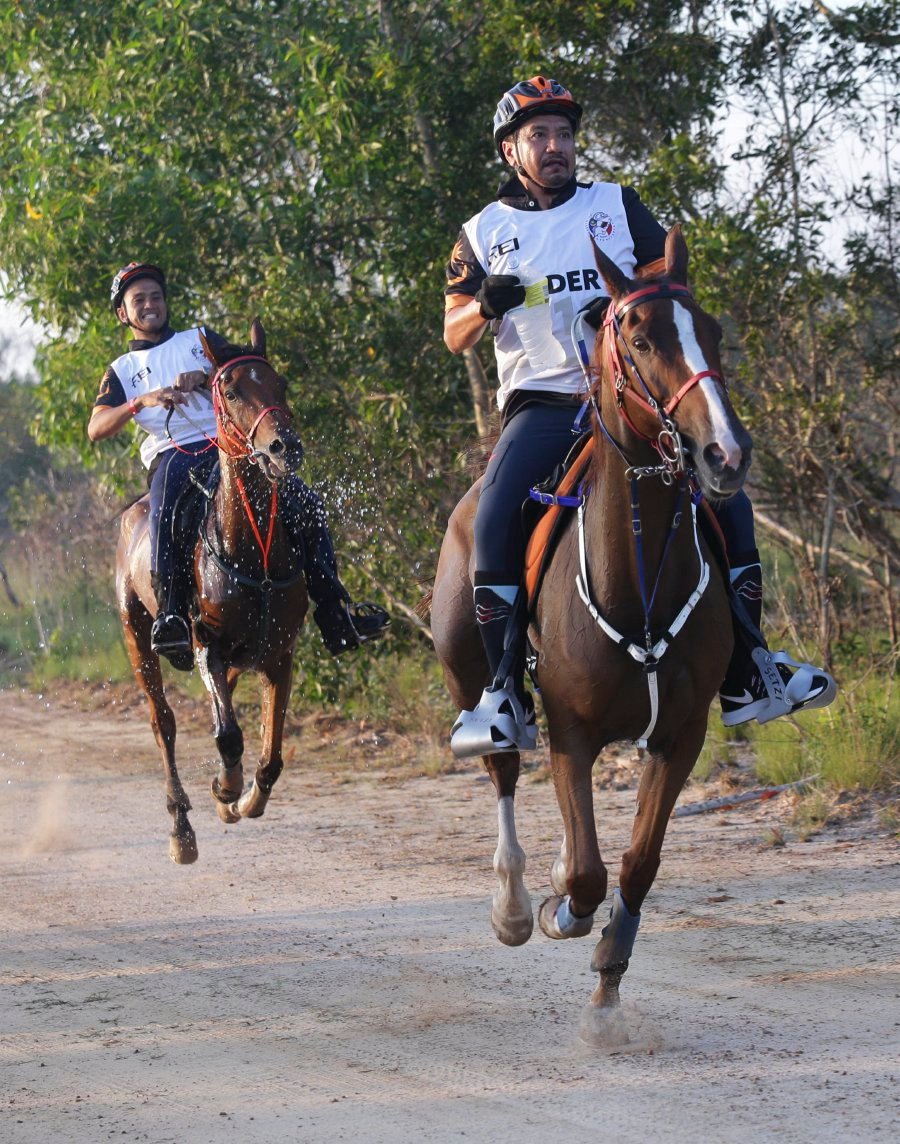 SETIU: After just over three hours of tough galloping, a vigorous Terengganu ruler Sultan Mizan Zainal Abidin was all smiles as he led Malaysia to two gold and one silver medal at the 29th Kuala Lumpur Sea Games 80km equestrian endurance race.

There was plenty of euphoria as team officials handed the Jalur Gemilang flag to His Majesty and the next two riders upon reaching the finishing line 9.20am at the Terengganu Internationμal Endurance Park in Lembah Bidong.

Apart from Malaysia, the other teams were from Cambodia, Singapore, Thailand and Brunei who were flagged off by Terengganu Menteri Besar Datuk Seri Ahmad Razif Abdul Rahman.

On the back of his mount Rtes Annaversary , Sultan Mizan strode in first to win the individual gold, followed closely by Mohd Bulkhari Rozali, riding JQ Tuan Junior, who won the individual silver.

He is the first Sultan to have participated in Sea Games history.

It was also the first time Sultan Mizan had won gold in equestrian endurance at the Sea Games, although Malaysia had bagged two gold at the 2013 Myanmar Games.

Although Mohammad Fuad Hashim who finished third astride his horse Mora Makaka, competition rules do not allow a rider from the same team to win all three available medals, thus, denying him the bronze.

Malaysia’s sixth rider, Mohd Yusran Yusuf was forced to retire midway in the race after his horse Castlebar Twilight limped off injured.

“We worked in cohesion, moved together and our strategy worked. Although it was a long race, it did not seem boring or lethargic as we galloped energetically.”

Sultan Mizan, who ranks fourth in the world, has vast experience having competed in numerous international equestrian endurance events in the Middle East and Europe.

“I would like to congratulate all and sundry, from the trainers, horse handlers, veterinarians, officials to the state government, for helping us achieve our target and working tirelessly for a successful race which went without any untoward incident,” he said.

The ruler hoped Malaysia’s success would boost its chances to host the Asian Endurance Cup and the World Junior Endurance Championship next year.