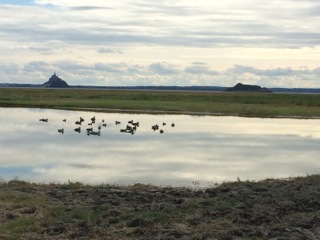 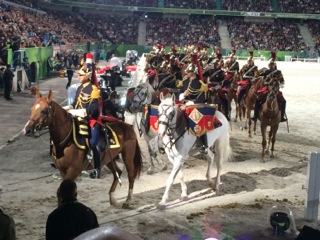 Six am came very early this
morning!! We spent most of it doing photographs of riders, riders with
horses, riders, horses and teams, etc. dressed in various donated
garb. It further emphasized how fabulous our supporters have been!!
Thank you again and again!!! We got done around noon and went riding
at the track and there was more bottle hand off practice (now with the
professional photographers), so hopefully there will be some good
pictures circulating from that session. For a late lunch, we stopped
by our new (as of today) favorite café in Genet (it is our second time
there, but the waitress is really lovely and we learned today that she
and her mother run it together). 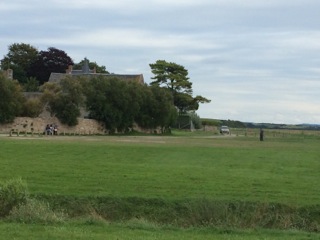 Jim also joined us for lunch and somehow it came up that our waitress is also a massage therapist. When Jim, with his dry sense of humor, asked if her hands were strong enough (she probably weighs 110 pounds soaking wet), she immediately replied “Wanna find out?” :) 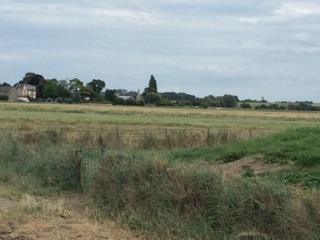 We took Rev for a hand walk down to the beach late this afternoon. We finally got the trail map today and it looks like the trail will again run down along this section of beach (although in the opposite direction). I wanted to get a good look at the footing in the area although it’s still not possible to know exactly where they will mark the trail. Many, many local people and tourists are out walking or biking in this region that is a big vacation area, and several stopped to talk with us as we walked along with Rev, like a big dog. One gentleman who lives locally spoke with us for some time describing the duck blinds along the beech (I hadn’t noticed the ducks were decoys although we hear shots being fired every morning and we knew it was duck hunting). He also told us that they have had a lot more rain than normal and last month the entire beech was underwater. 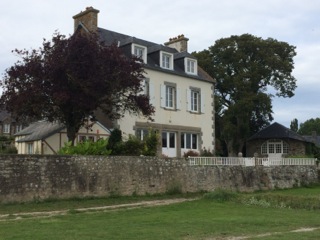 I can only imagine the anxiety of the organizing committee knowing that nearly 200 horses would be soon coming for an event and they didn’t have trail! He also said that the locals believe that if you can clearly see the Mont and Tombelaine (the other island in the bay), bad weather is coming. It was crystal clear this evening, which fits because they are calling for rain all day tomorrow, most days this week, and the day of the ride. I expect the organizers must still be pretty anxious because we have heard they are already re-routing trail because of mud. We were also stopped by three older people, whom did not speak any English, but were curious about Rev’s fly mask. I couldn’t remember the French word for “fly”, if I ever knew it, and we were left trying to pantomime a fly and explain sunburn (it is a long mask to protect her white nose from sunburning) with the only relevant word I remembered being “soleil” for “sun”. 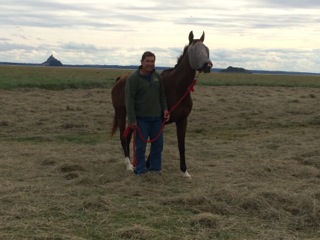 I think it worked…at least they were very nice when we parted so I don’t think I said anything terrible.


I am going to include some images I got from the opening ceremonies
as well as from our walk this afternoon to give you an idea of this
section of trail (and the duck decoys). Obviously the sections along
the coast are flat other than the dunes (some areas remind of grass
plains and they are actually called the “salt flats”, but some
sections are just like sandy beach). The sections of trail that are
inland are rolling with terrain very similar to Fair Hill, MD or
Lexington, KY.