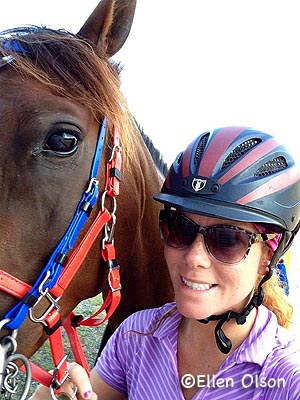 Before April of 2014, Hot Desert Knight had already made a name for himself in the USA endurance world. The bay gelding is 14 years old, has a record of 3565 AERC miles and 14 Best Condition awards over 11 seasons (mostly with owner and heavyweight rider Farzad Faryadi), has finished 15 of 16 100-mile rides, and holds at least one course record, in the Vermont 100.

Before April of 2014, Ellen Olson of Dubuque, Iowa (and Florida in the winter) had already made her mark as an experienced horsewoman and endurance rider with 3240 AERC miles, as a partner with husband Jeremy Olson in their Noslo Endurance training business, and as a USA Team Member for the Endurance Championship at the 2010 Kentucky World Equestrian Games, though sadly, her horse came up lame the day before the race.

Ellen and Hot Desert Knight are now set to accomplish even higher goals on the world stage: together they are headed to France in August to represent the USA in the August 28th Endurance Championship, part of the 2014 World Equestrian Games.

Ellen remembers seeing "Dez" the last couple of years at endurance rides with Farzad; her husband Jeremy said he always thought Dez was one of the top 3 horses in the country. The Olsons made a deal with Farzad in 2012 to lease the horse and try to make the USA team for France. "I always thought my horse could get to that level," Farzad says, "but I just didn't have the time to give him what he needed, so I think it worked out great."

Ellen and Dez paired up for the first time together in March 2013 for the 100-mile FITS ride in Florida, and they won first place and Best Condition. They competed together again in Montana in the Ft Howes 100-mile ride in June, and got second place and Best Condition. Those races cemented the Olsons' confidence in Dez's potential. "We figured he'd have a really good shot at making the team with his ability. He basically is just a natural, especially for a 100-mile horse. He loves what he does, and he's good at it. He's so awesome!" Ellen says.

Dez seems to know how good he is, all business on the trails; but he is by no means an easy ride. "He's extremely, extremely forward. He doesn't spook; he pulls and pulls and pulls, ears always forward. At the Team Trials (held April 18-19 in Ehrhardt, South Carolina), it was all I could stand to hold him back for the 50 miles. I kept thinking, 'He's going to relax and loosen up, he's going to relax and loosen up…'

"He does kind of relax a little bit more after 50 miles, but at the Team Trials we were all riding as a group; it was a huge competition for him." 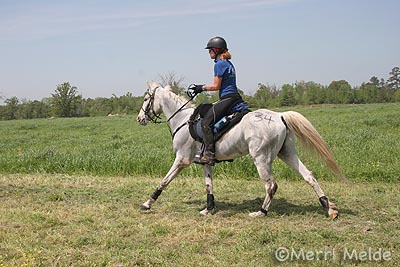 Ellen grew up showing horses, doing dressage and eventing with her twin sister, Eryn. She went to Kirkwood Community College in Iowa, where she showed in saddle seat, Western pleasure, and hunt. She was 17 when she met endurance rider Louise Riedel, and started helping her condition her horses. It was natural for Ellen to make the transition to endurance rider, since a few of her eventing and jumping horses were Arabs or Arab crosses who loved the cross-country portions of their events.

Ellen did her first endurance ride at age 18; and now, 14 years later, she and her husband Jeremy are happy to pass that addiction on to young endurance riders. "That's kind of our big thing now, is we really enjoy bringing the Young Riders to the international level. It's rewarding to get them addicted early on. I remember when I was a kid, all I ever wanted to do was anything with horses.

"It's really nice to see the kids like that, the ones that really like to do the work, and asking what they can do next, and always asking question, like 'What did I do wrong, or what can I do to improve.' I can see them going down the same path as I did."

With her position on the USA Endurance Team, Ellen is setting a good example for the Young Riders to follow, and Hot Desert Knight's fans will be watching.

"From the first time I brought Dez to a ride, I had hundreds of emails, and people coming up to me at races, people I don't even know say, 'We are so excited for you and Farzad to have Dez!' They all said that they felt we deserved a chance to show the world what he could do, and it's been a real inspiration working with him.

"I'm so excited! Our horses are looking great, I think we should be able to help the team out!" 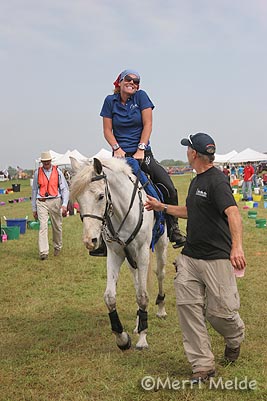