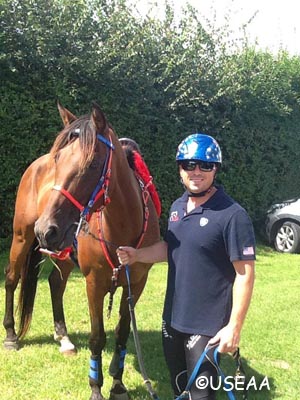 Considering his background, it was somewhat inevitable that 39-year-old Jeremy Olson would one day end up on the USA Endurance Team. His dad Craig Olson started in the sport in 1978 when Jeremy was 3, "so I did my first 50-mile ride when I was 7, in 1982. And I've been in endurance pretty much ever since," Jeremy says. Craig Olson's early AERC record shows a lot of 100-mile rides - sometimes that's the only distance he did during the season. He also won the 1990 Race of Champions and Best Condition on Spruce Sarta, a horse who had a 23 for 23 100-mile record, and where he defeated future multiple World Endurance Champion Valerie Kanavy.

Jeremy did leave endurance for a while - a business degree in college, and then working in the Real World for about 6 years kept him busy. "But it's always been in my blood, it's one of the only equestrian disciplines I've ever known."

After he and his now-wife Ellen Olson (also on this year's USA Team) moved closer together in Iowa, they decided to try endurance full time. Around 2008, they both quit their jobs, went to Florida with 6 endurance horses, and had a very good (winter) season there. Subsequently, they were offered jobs training and riding in Qatar in the Middle East, where they went for 3 winter race seasons. It was an invaluable experience. 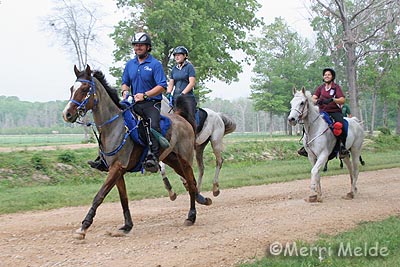 "We got to expand our knowledge of the sport so much because we had about 80 horses in our control," Jeremy explains. "We designed all the training for the barn, and oversaw everything; so we could take 10-12 horses, put them in 3 different groups and try different philosophies in the back of our minds and see how they were brought into races better, whether it was walking vs running vs swimming vs treadmills. We had all the toys, and we could do it all and kind of fine-tune our training program. You don't have that opportunity here very often - that many horses to do that many different things with, to just expand your knowledge base, learn the best way to keep them sound and healthy and fast enough to be competitive. So it was great."

Back in Florida in the winters is where the Olsons got to know Kentucky endurance rider Amy Wallace Whelan, and her gelding Wallace Hill Shade. The 12-year-old half Arabian, half Tennessee Walker has an AERC record of over 2000 miles, 34 completions in 38 starts, and 5 of 6 100-mile completions in over 8 seasons. Amy knew her horse's potential, but she didn't have the time to devote to bringing him along to the top international competition level. "We talked about it," Jeremy says, "and came to an understanding and agreement that we take him and condition him and start riding him. It's not a permanent arrangement; at some point he'll go back and Amy will continue riding him, but she thought through his prime years it would be good to try to bring him as far as he can take us, because she felt he's such a nice animal." (Amy recently competed in the Mongol Derby in Mongolia, billed as "The Longest and Toughest Horse Race in the World", where she suffered an injury and could not complete the race, but still calls it "The greatest adventure ever!")

In January 2014, Jeremy and Wallace Hill Shade finished second and got Best Condition in the Broxton Bridge 100-mile ride in Ehrhardt, South Carolina; following that on April 18-19 they participated in the Endurance Team Selection Trial at Broxton Bridge, and the effort resulted in their being ranked 6th on the shortlist for the USA Team bound for the Endurance Championship at the World Equestrian Games, on August 28, 2014, along the Bay of Mont St Michel, Normandy, France.

As the first team alternate, Jeremy and Wallace Hill Shade have travelled to France with their teammates, and are ready to step up if called upon. "Ellen's horse Hot Desert Knight and my horse Shade, they look great at the moment, so now it's our job to keep them looking that way from here until race day and then execute on race day. Pretty much our work is done as far as fitness goes; both of our horses are fit and sound, so we just have to do some maintenance work between now and then, and hopefully nothing dumb happens. We'll do our best to keep them sound and healthy, and hopefully the 5 horses on the team look great and can start, and we can bring home a medal; but if something happens, I'll be ready to step up and help the cause as well." 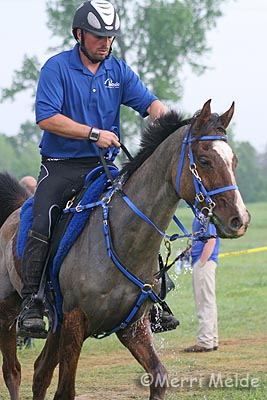 It's all about the USA Team effort, and Jeremy expresses his belief in the USA's chances this year. "We're excited. We think we have a good fast team put together. So we hope to make everybody proud this time, and do something we haven't done in a while.

"There are some fresh faces on the team, and some not-so-fresh faces; so I think that Emmett has really gone out of his way to put a plan in place and give a goal that we had to hit coming into even trying for the qualifications for this WEG, certain speeds that he wanted to see us do in one 160-km ride. And all 7 horses that are listed to go have hit that speed that he's asked. So if we can hit it again while we're there, we'll be bringing home a medal."