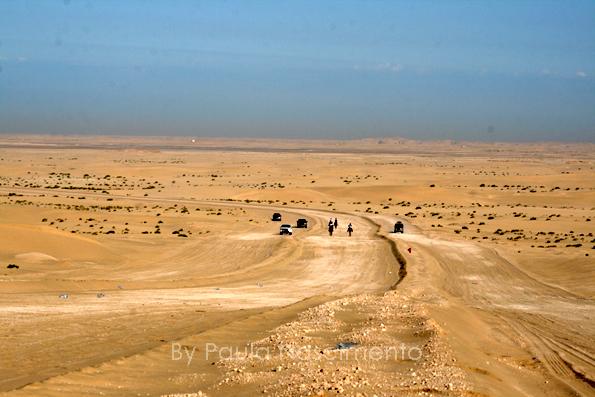 Three days in the desert, with high speed and heat formed the backdrop of the 4th edition of HH Sheikh Sultan Bin Zayed Al Nahyan Endurance International Festival. Some races were part of the event in Boutheib Endurance Village: International Open Race FEI *** 240 km, Juniors & Young Riders 120 km **; Privates Horses 120 km **; Federation Qualifier Ride 80 Km and 40 Km Qualification Ride. Starting December 31, 2009, the Festival also included an auction in Boutheib Stables. The event was organized by the Emirates Heritage Club with the Federation of United Equuestre (EEF).
Coincidence or not, is another year that Al Wrsan Stables remain unbeaten in the competition of 240 km. Only Sh Sultan Bin Zayed Al Nahyan stables has this trophy, while most stables, trainers and veterinarians in the United Arab Emirates hope to come.

The distance of 80 km per day can apparently not be difficult, but certainly this is one of the most difficult races in the desert, inhibiting many stables to participate with their horses. Their prefer to save them for other events less technical. It takes much training, wisdom and sensitivity for the horse/ rider to finish the 240 km in good physical condition.

This year, the highlight was the argentinian horse breeding Cal Puelche, that led Wrsan Stables to the highest place of the podium. With an average speed of 23.36 Km/h, Puelche was with Abdulla Rashid Mohd Saeed Al Naqbi and all scored a total of 10h16min12s on track. Puelche presented during the three days of competition good recovery. The time recoverying was between 1min16s/ 2min40s. Only the return of the first loop the horse was slow to recover and have to wait 6min14s to go into the vet check. CAL Puelche performed at the vet check nine times and added an average recovery with 19min22s.

In the first loop, Puelche arrived with the 27th place. The speed on track in this loop was 24 km/h. In the second loop the horse recovered many places, taking second place and the speed was 25.83 km / h in the desert sands. After Puelche and Abdulla was between 4, 2nd and 1st place, but not reaching the highest speed that the 2nd loop (1 day). Puelche performed well in all stages, including the initial inspection of each day to start.

Cal Ramon, in Argentina, was the Puelche breeder in Argentina and trainer was Jorge Vita, then when the horse was exported to the United Arab Emirates in 2008.
The second place was Saif Salem Mohd Al Fares which Raaward Kasmin, Dubai Endurance Stables. They stay every day in the top 10 and on the last day was running for the top of the podium. Raaward made the 1st loop with the average 25.39 km/h and finished the race at a speed of 24.58 km / h, with only two seconds off the champion. The total time of his recovery was 28min48s.

The third place went to Munthar Ahmed Al Baloushi and Jibbah Enog, a horse feared and respected in the UAE. Representing the Al Reef Stables, Jibbah was leading the race for 5 loops and made the race in 10h16min33s. The average speed was 23.35 km / h and the recovery of the horse enviable, since not passed 1min55s. In the third loop Jibbah performed with only 1min17s, totaling just 12min49s recovery. The trainer of Jibbah in Al Reef Stables is Yousef Ahmed Al Bloushi.

On the first day (December 31), the race was divided into loops of 30 km, 30 km and 20 km, starting at 6am. Was 50 horses that begin the race in search of the title and many stables in order to end the hegemony of the ever-victorious Al Wrsan. Were 38 sets that ended the 80 km in the first day. On the second day, only 34 went to the trail in the fourth loop and completed the 6 th loop 23 horses. All days were 3 loops that made up the tracks, totaling nine rings. Start on the morning of 02 January 23 horses and 19 finished the race.

On the last day of racing was impossible to know the winner and the last three loops the dispute was between the top three who took turns in the standings.
Among the horses that were in race, was the Brazilian horse WN Peronek, exported to the United Arab Emirates in April 2008 for Al Wrsan Stables. In Brazil, Peronek was owned by Renato Salvador. Highly praised by professionals in the stable arabic, Peronek was eliminated on the 2nd day, after run 140 Km. He left the race after finishing the 5th loop. Peroneck was with Bader Ali Saeed Al Kayoum and remained at 18, 21, 18 and 15 place. The highest speed that was reached 24.78 km / h.
In Provately Owned Horses CIS * 120 km, the winner was Ylmood, ridden by Eduardo Herrara Saravia, representing the team Al Ain Endurance Stables. With an average speed of 22.93 km/h , the horse completed the race in 5h14min. Second place went to Rashid Saeed Al Kamda with RS Najid, averaging 22.77 km / h and only two minutes behind the champion. Al Kamda is the buyer of the Brazilian horse breeding Al Galyb HCF. In 2009, he bought three more horses in Brazil, sold by Haras Morada do Sol, owned by Silvio Arroyo. The horses are breeding for Kazik Stud, that the owner is Cláudio Ribas.
With the third place on the podium was Zafar Nawaz Shah with Bicho and did 22.74 km / h.

The website Endurance Brazil and Arabian Horse Magazine paid tribute to Sheikh Hazza in thanks to the invitations to coverage of the event.
It was the 4th edition of the Festival and the first was won in 2007 by Sh Hazza Bin Sultan Bin Zayed Al Nahyan on ZT Faraventure. In 2008 it was the turn of his brother, Sh Khaled bin Sultan Al Nahyan who formed together with Nemer (Roxborough Zepher) and in 2009, third edition, the winner was Abdul Rahman Mohd Karam riding Nemer (Roxborough Zepher).
By Endurance.Net - January 14, 2010
Email ThisBlogThis!Share to TwitterShare to FacebookShare to Pinterest