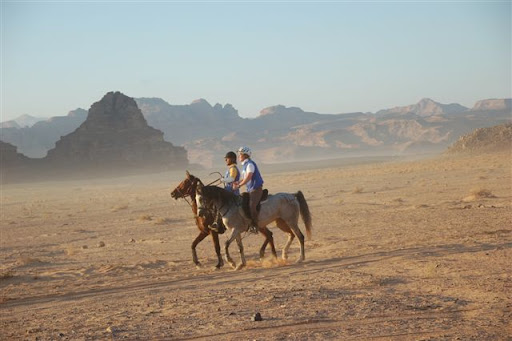 Story and Photos by Heidi Bernsdorf

What a landscape, what a fairy background for this 80km endurance ride, marvellously organized by the Jordan Federation under their President HRH Princess Alia bint al Hussein, a thoroughbred horse lady herself.

The Vet Check took place in a niche between two bizarre mountains, perfectly formed to serve as a grand stand for the visitors.

Two groups, Endurance Qualifier/80km and International Endurance Ride FEI CEI one star over 80 km, and more than 100 horses were presented at the Vet Check on 13th of November, 2009.

The ride was in 3 loops of 30, 30, 20 km and went over completely changing ground, from deep sand to rocks and gravel. Most of the horses were in very good shape and only a few were eliminated at the Vet Check. Looking at the "breed" it mostly said: local. Wonderfully shaped heads, elegant bodies and good sound legs and hooves, they loved to run.

A German lady, riding at international level in Europe, was promised a horse as an exchange for a possible ride in Germany on one of her horses. The horse they presented for her at the Vet Check was completely lame, obviously from the transport, finally, 5 minutes before the start at 6.00 o’clock on 14th November, she was offered another horse, the owner was from Petra, and the horse was very much attached to him. Indy, the horses' name, fought a very fierce battle with poor Susanne, the German riders' name, for the whole first loop of 30 km. Had she taken all that power and tried for the first places, I think she would have come home after 80 km among the first 5 horses.

When the horses assembled for the start, it was dark and very cold, at the start the first light of the day came up and painted the amazing rock formations in all different colours of pink to red, an image one can never forget it was breathtaking!
For "greenhorns" like me the desert looked mostly everywhere the same, and without the scout qualities of Mr. Abdel Aziz Al Hasanat, father of "Indies" owner Hamzah, I would have been lost and never found back to the Vet Gate.

Once we got stuck in the sand, but out of the blue there were other 4-wheels who helped us out.

Following Susanne and Indy was fascinating; more so to see how the horse finally accepted the "new rider", became well bent and good at the reins, responding to the orders of her rider!

The World Champion of WEG Aachen 2006, Miguel Ubach from Spain who also was supposed to ride a rented horse from the Royal Stables, the horse was lame at the Vet Check, was so lucky to get "Qual" a Polish bred gelding from the stables of HRH Prince Ali Bin Al Hussein, normally ridden by the stable manager of HRH Prince Ali's stables, Jehad Shhaltough, who broke his ankle the evening before the ride.

This horse "Qual" was born in 1990 and looks like a very young horse, he won the international race and did the last loop of 20 km at an average speed of 27 km/h, amazingly fresh he came into the Finish after altogether 4 h 32 mins.51 seconds.
Of the 46 horses which had left the start at six o’clock in the morning, 24 came in “fit to continue” among them was "Indy" with Susanne! That means more than 50% succeeded, which is a very good finishers rate.

Wadi Rum was an experience to all of us and we felt the spell of this corner of the world, which has been inhabited by mankind for the last 19 000 years, rock carvings found in the mountains here give us evidence of this theory. Too short was our stay there and we had too little time to experience history and fauna and flora, and: no time for dreams!
By Endurance.Net - January 29, 2010
Email ThisBlogThis!Share to TwitterShare to FacebookShare to Pinterest