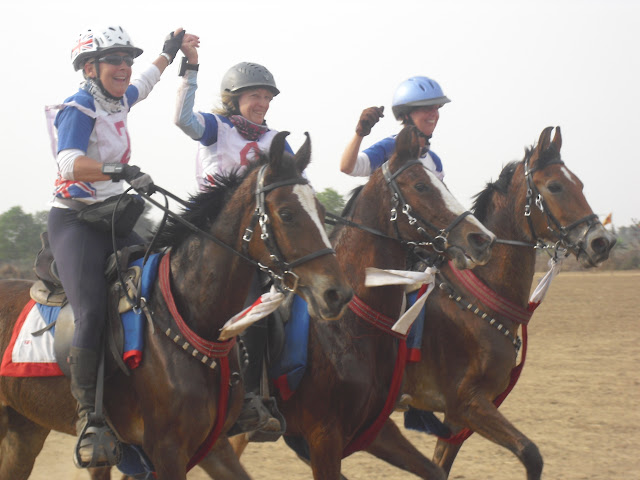 Marwari horses, loaned by Rawal Devendra Singh of Nawalgarh, succeeded in taking the Bronze medal with an all ladies Team representing Great Britain & the UK Chapter.

This was an 81km endurance race with 10 teams invited, plus some individuals, and consisted of 4 laps of 20.25km per lap, in one day, against the clock . All competitors were 'vetted' in between laps to check the horses heart rate, hydration, soundness and general well being, to ensure the horse was 'fit to continue' and not in distress. The Indian Army entered 2 teams and took gold and silver followed by the British invitational group in Bronze position. Team members were from Endurance GB: Lesley-Ann Parker, Pip Westwood & Bryony Dickins and were joined by Caroline Moorey who is the Chair of Friends of Marwari/Kathiawari Horse UK and also the UK / India link for the event.

The British were the only ones to get all their horses home, and Lesley-Ann, Caroline and Pip achieved the ultimate of riding all 4 loops together, vetting within 2 minutes each time and crossing the line together shouting 'MARWARI'.

Other countries present were, France and Italy (with Assissi squad members riding), Russia, America, Sri Lanka and Indian civilian teams. Team GB rode the Indigenous Marwari breed of horse, who have unique lyre shaped ears, provided by Rawal Devendra Singh who was delighted that the horses were so successful in such an international arena, he said that "the British team’s success could only help to raise the breed profile, especially for this discipline, in which they seem to excel."

Last year three of the team (Lesley-Ann, Caroline and Bryony) took the gold medal for 50km riding Marwari horses loaned by members of the IHSI (read full report in our first newsletter which is on the website www.friendsofmarwari.org.uk). This year Caroline went out early to choose and prepare the horses many weeks before, and was pleased that, as the picture shows, the horses crossed the line looking as though they could have gone around again. The team had many comments from the vets and officials as to how well they rode the race. A professional equestrian photographer from Britain was invited by Caroline to record the event for the team this year, and he can be contacted via his website: www.michaelhuggan.com .

Team motto was 'to finish is to win' - to gain a medal was a bonus!

More photos HERE
By The Equestrian Vagabond - January 08, 2010
Email ThisBlogThis!Share to TwitterShare to FacebookShare to Pinterest