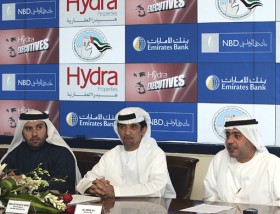 The 160-km FEI CEI three-star ride will be held at the Emirates International Endurance Village in Al Wathba and is sponsored by Hydra Properties and Emirates National Bank of Dubai.

His Majesty Tuanku Mizan Zainal Abidin, the King of Malaysia, is part of a very strong list of foreign riders, many of whom will be using the event to prepare for the World Endurance Championship, to be held in Malaysia later this year.

Adnan Sultan Al Nuaimi, Director General of Abu Dhabi Equestrian Club, said: "The total prize money on offer is Dh1.5 million. In addition, the winner will also receive a car. Cash prize will also be given to the best conditioned horse award winner."

Dr. Sulaiman Al Fahim, CEO of Hydra Properties, said: "Hydra Properties has been in the forefront in sponsorship of various community events including sport, but this support for The His Highness The President of the United Arab Emirates Cup is a moment of great pride .

"Last week Hydra Properties sponsored the His Highness The President's Cup for Juniors and we were very happy to see some of the most promising youngsters display their skill in endurance, a sport which is part of our culture and heritage."

Ali Mohammad Ali, Regional Manager, Abu Dhabi, Emirates NBD, who also addressed the press conference, said: "This is the year that we are involved with the His Highness President's Cup. It is an honour for us to be among the sponsors of this prestigious event, which is taking the local and regional equestrian sport to an international level."