Ladies Challenge - ready for Round III 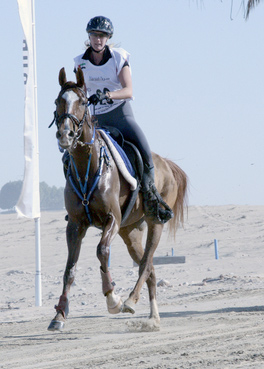 Friday 8 February saw an exciting Second Round of the HH Sheikh Sultan bin Khalifa Al Nahyan Challenge. This three part series, held at the Al Asayl Endurance Village, Sweihan near Abu Dhabi, is specifically for Lady Riders. This is the second year the Challenge has been run and its ever increasing popularity is clear by the rise in the number of entrants.

Friday’s race saw 34 ladies set off into the chilly dawn of the day. Thirteen nationalities were represented with competitors from as far afield as New Zealand, Australia, South Africa and Canada.

The winner of Round II was Sue Sidebottom (GBR), assistant to the General Manager, Mr Ali Moosa, of the Dubai Equestrian Club. She was riding Fenwick Cadenza, an 11 year old Anglo Arab owned by Sheikh Hamdan bin Rashid Al Maktoum. Sue had previously accompanied the chestnut gelding to 5th place in Round I of the Ladies’ Challenge and is aiming for the 3 finish hat trick with the same mount. ‘I am delighted to have won, the win belongs to Seeh Al Salam stable, HH Shk Hamdan bin Rashid Al Maktoum and my thanks go to him. Ali Al Mehairi trains the horse, he and his team have done a brilliant job and I had fantastic crewing.’

The top 5 finishers completed the 100km at over 26kph. The race was won at an average speed of 26.18kph, the fastest time recorded for an Open FEI 2* 100km Endurance Event. This is the second World Record to have been beaten in 2008. Omair Hussein Al Bloushi broke the 160km World Record in Dubai earlier this year finishing at an astonishing 24.71kph. The same combination hold the World Record for the fastest speed in a Young Rider FEI 2* 100km Endurance Event, 26.32kph – just 1 minute 51 seconds faster than the the finishing speed on Friday.

Reem Shaban Ibrahim Hasan (UAE) rode her mount for the day, Rivendell Sharman from Al Reef stables, into 2nd Place. This 14 year old Chestnut gelding, bred in Australia, was going for his 6th completion over a desert course and put in a great performance ensuring his 2nd top 3 placing for Al Reef Stables.

The winner of the first round, Afra Khalifa Al Suwaidi (UAE), finished in 4th place on Friday. She was riding the 10 year old bay gelding Al Galahn from Al Reef stables, not the same horse she won with in the first round. Ladies that have now finished in both Round I and Round II and are in strong contention for the title are:

The third part of the Challenge is to be held on 7 March, and with a several ladies in strong contention to be the overall winner, it certainly looks to be a highly anticipated event!
By Endurance.Net - February 17, 2008
Email ThisBlogThis!Share to TwitterShare to FacebookShare to Pinterest