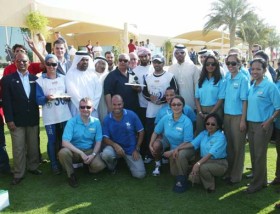 In a thrilling tussle for supremacy, Yousef, along with Al Wathba rider Ali Khalfan Al Jahouri on Sha-Ali and Spain's Maria Alvarez Ponton on Antares Sauveterre, battled throughout the five-stage 120km ride, which kicked off endurance action for the Dubai Equestrian Club at the Dubai International Endurance Village.

It was Ali Khalfan who led for most of the first three stages, with Maria in close pursuit while Yousef and Estaban were in sixth place during the first half of the ride.

"The ride was run in two groups. The first group of which I was a part set a very fast pace and I was a bit worried. But I kept him behind and went for it in the final two loops," said Yousef, who was riding Estaban for the first time.

The 15-year-old bay gelding was earlier trained by Spaniard Jesus Manuel Berna and was one of the top horses of the previous season.

"This was one of the fastest rides and the average speed was very high. In the last stage we touched 26.37 km/h," said Yousef, who won five rides last season.

Ali Khalfan said he was equally worried about his horse which just kept pulling him during the start.

"I really found it very difficult to keep him as he kept pulling. In fact I was keen to retire after the third stage but the grooms said Sha- Ali [his horse] was in good shape. I am happy he finished and the second place is certainly a good result for the stables," Ali Khalfan said.

Maria, another top performer of last season, once again displayed superb form and in fact posed a stiff challenge to the two UAE riders. After being placed fourth in the first two stages she moved into second in the third stage before being pushed back by Yousef and Ali Khalfan.

Earlier in the morning a total of 103 riders got off to a mass start in this Bab Al Shams Resort-sponsored ride which was also DEC's first of the season. Two Qualifier rides were also held at the venue in Seih Assalam.