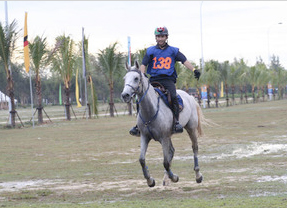 First-place horse and rider, Naser Marzouqi (UAE) riding Hafiza du Mas (photo: Cidinha Franzao)
Heavy tropical storms and torrential rain greeted the 38 horse and rider combinations who set out on the first phase of the FEI CEI 3* Trial event at Terengganu, East Malaysia at 4.30 pm on the afternoon of 10 November 2007.

Eighteen combinations from around the world joined by 20 locally based combinations took part in the trial event to assess the weather conditions and facilities planned for the 2008 FEI World Senior Endurance Championships.

This second trial event was part of the two-year-preparations being undertaken by the organising company YDSM and the Malaysian Equestrian Federation.

The event, The Sultan's Cup Terengganu Endurance Challenge 2007, needed to meet the minimum criteria for overseas combinations (40% completion rate within 16 hours ride time) imposed by the FEI to asses the safety and ability of horses to successfully compete in the climate of Terengganu State.

The tropical storm and heavy rains in fact produced cool, near ideal conditions - albeit very wet, which brought about a completion rate of 66% for the overseas combinations who had arrived some three weeks earlier into the extensive quarantine facilities purpose built for the event by the OC.

Some six nations from South America, North America, Europe, The Middle East and Asia were hosted by the organisers. These nations were also joined by riders from the UAE and Malaysian based South Africa and Australian riders. Unfortunately though, no Australian based combinations that had been invited by the organisers were able to compete. They had been prevented from traveling because of the recent equine travel restrictions imposed in Australia.

First to cross the finish line at just after 8.00 am the following morning was Naser Marzouqi from the UAE riding Hafiza Du Mas with a total ride time of 10 hours 31 minutes giving an average speed of 14.86 kph. Jack Begaud from France with Idais Tohiba was second with a speed of 14.82 kph. UAE rider Khalid Al Shafar on Supreme Dream took third place by a short head in an exciting racing finish for the line just ahead of Maria Vitoria Liberal Lins on Filoteu Rach from Brazil, both riding at 14.69 kph.

Full result details can be found on the following link http://www.malaysia-wec.com/sc_results.html

Full information can be found on the official website for the event on the following link http://www.malaysia-wec.com/sultanscup.html

The final ride detail showed that of the 18 overseas combinations that started the ride, 66% achieved completion and were joined by over 50% of the locally based horses and riders. 8 horses were presented for the Best Condition Award later that morning.

Whilst everyone taking part in the trial event accepted that the cool wet weather had greatly assisted in the high performances achieved, there was praise from the teams for the dedication and commitment from the Malaysian organisers.

Ian Williams, the FEI Director for Endurance who attended the event commented, “The trial run has fully met the criteria imposed by the FEI and the facilities present at the venue were of the highest standard. The weather was extremely kind so no one must forget what the temperature and humidity can be like and to think that it is easy to complete 160kms in tropical conditions. However those who have been successful at this trial event have shown that with the right degree of experience and care, and with assistance from the cooler weather, it is possible to compete safely in Terengganu.”
By Steph Teeter - November 14, 2007
Email ThisBlogThis!Share to TwitterShare to FacebookShare to Pinterest
Labels: ride