A very warm welcome was extended to the four British riders, Sophie O’Hara Smith, Larissa Whiley, Philip Hurst and Rachael Claridge, who went over to Uzes in the south of France as guests of the Society Hippique Francais (SHF). Not only had the organiser Guillaume DeThore provided a translator but had also prepared special copies of the crew routes etc in English, and had decorated some of the tables in the restaurant the marquee with union jacks. 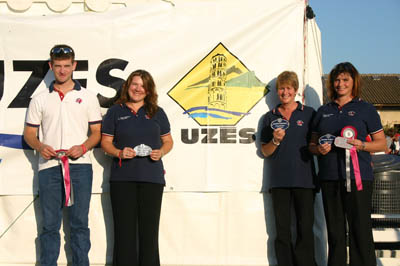 This event is the national showcase for young horses from all over France. It was set up 14 years ago and started with just 40 horses. This year there were over 400. It is designed to pin point potential elite horses and influence their early training so that they are brought in a controlled and well planned manner. I understand it has become a successful a commercial event which was not the original intention and many horses are for sale. 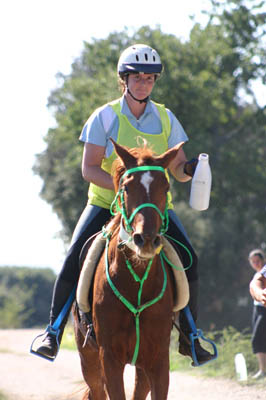 The venue was at the Haras National (National Stud) with beautiful manicured grounds. It was lively and bustling, with lots to see with vetting going on most of the days. There was a running commentary, electronic information on the races and places to sit and watch the vetting and trade stands, and of course the horses at the stud. 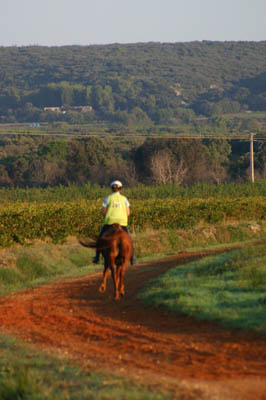 There were large open sided marquees providing food for riders crews and visitors and a VIP marquee with lovely food which we were given passes for. Another nice feature of the weekend was the aperitifs that were provided in the evenings by the SHF which brought the riders and crews together.

On the Saturday we watched the 6 year olds competing. There were some 180 declared with 157 starters of which 91 finished. Only 15 received the coveted elite award by gaining three points, 30 were excellent, 29 tres bon, 12 bon and 5 classe and 66 eliminated or retired. The top successful speed was 18.2 kph.

Later on three of us got to meet our prospective mounts, all except Rachael who rode hers for the first time in the event. The horses all came from well known endurance homes and it was very generous of the owners Francois Atger, Antonio Noguera, Virginie Simone and Stephan Chazel to provide such potentially good horses for us to ride.

In the evening we were treated to a Gala dinner with a display of traditional Carmargue riding. The French team were at the dinner and were presented with gifts to mark their success in Portugal to the rousing strains of Queens “We are the champions of the world”!! 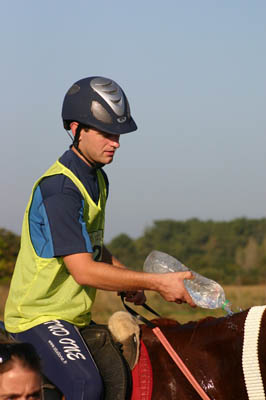 Our 5 year old class was on the Sunday. The 60k ride is run between 12k-15k in two 30k loops with a 40 minute hold. At the end the pulse is taken at 10 minutes. If it is 54 or under the horse scores one point if not it returns at 30 minutes and has to be under 64 and sound. The horses that pass the initial heart rate parameter then come back to be assessed for condition and attitude and trot up in front of the vets and others.

There were 135 starters and we set off in groups of about 10 at five minute intervals. According to reports on last year’s event the organisers had decided to avoid having a mass start after excessive speeds, especially for the 6 year olds. With the number of horses involved I was fully in support of this decision! 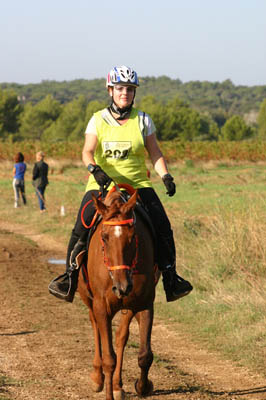 The ride was considered flat with a 400m change in levels over the course. There were two different 30k loops from the venue. The first loop was undulating and set off along the road and quickly lead onto a series of broad sandy tracks which had been specially prepared with a new top surface for the ride, these were interspersed with some narrow wooded quite stony sections and hard tracks. There were quite a few minor road crossings and the route took us through several small villages where the tarmac was very very slippery. The lead horse in my group went down on the road but was OK.

The second loop was mostly over flat open agricultural country with less of the beautifully prepared sandy sections. There was one significant climb which gave a fantastic view from the top towards the Cevenne mountains to the north.


We managed to get three of the four horses home within the10 minute pulse rate parameter of 54 which was not bad considering our mounts had had less training than their stable mates, mine was on it’s third ever ride! Three passed the trot up and attitude test, mine shied and failed to get a second point, so we ended up with two excellent and two tres bon. Overall there were 62 horses graded excellent, 48 tres bon, 21 classe and I believe only 4 retired or were eliminated. The owners were delighted and we were presented with tee shirts and stable plaques at the prize giving. 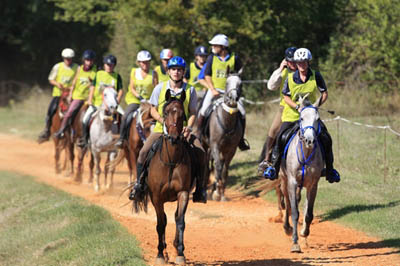 The organiser Guillaume DeThore extended an invitation for us to bring GB horses another year if we wished and said he could organise for us to join the French Federation to be eligible. Anyone wanting any more information could contact me through EGB http://www.endurancegb.co.uk
By Steph Teeter - November 01, 2007
Email ThisBlogThis!Share to TwitterShare to FacebookShare to Pinterest
Labels: ride