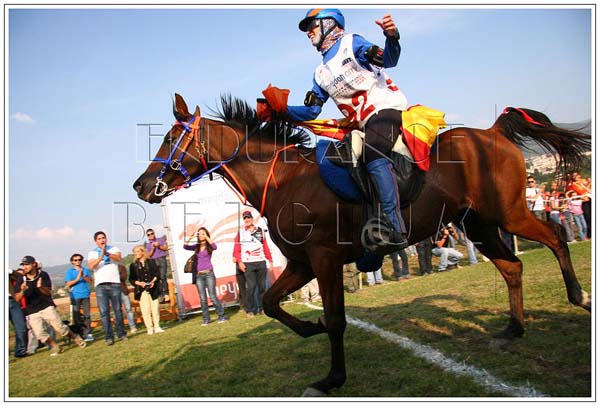 SPAIN’s Maria Alvarez Ponton made endurance history by becoming the first rider to hold both World and European titles at the same time following a convincing win at the FEI Meydan City Open European Endurance Championship held over the weekend in Assisi, Italy.

Alvarez Ponton has now stood on the medal podium for three year’s in succession. With her 13-year-old French-bred gelding Nobby – world champion under entirely different conditions in Malaysia in 2008 – she also took individual bronze at the FEI European Championships at Barocca D’Alva in Portugal in 2007.

She crossed the line at the end of yesterday’s tough contest in the shadow of the magnificent Saint Francisco's Basilica in 8hrs:10mins: 58secs to complete at an average speed of 19.5km/hr.


More...
By The Equestrian Vagabond - September 30, 2009
Email ThisBlogThis!Share to TwitterShare to FacebookShare to Pinterest