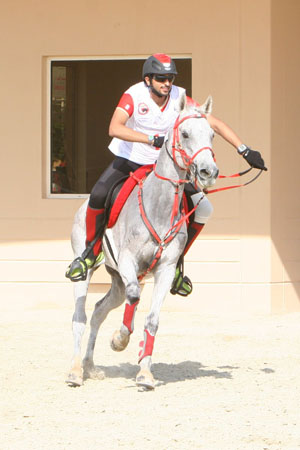 After leading the Bahrain national team to a remarkable third-place finish in the World Championship held two weeks ago in Malaysia, Shaikh Nasser was again unstoppable as he competed with the Kingdom's best riders in this 90-km race.

More than 75 riders, representing different stables from across the Kingdom, took part in this championship which featured four stages, starting with 30km for the first, 25km for the second, 20km for the third and 15km for the fourth.

Shaikh Nasser, the Bahrain Royal Equestrian and Endurance Federation (Breef) president, steered Omsura Nasrohn to victory in three hours, 41 minutes and 27 seconds with an average speed of 24 kms per hour.

Second place went to Abdulhaq Qadoori, also of the Royal Endurance Team, in 3:59:54.
He was followed by Al Fateh Stable rider Isa Al Dossary, the surprise of the championship, who rounded off the podium with an impressive third-place finish in 4:13:24.

However, Shaikh Nasser came from behind in the second stage which ended in his favour in 2:15:27 and ahead of Qadoori who went up to second place in 2:15:59 while Mohammed Al Thawadi (2:16:34) of the Royal Endurance Team jumped to third.

In the fourth and last stage, there was no stopping Shaikh Nasser who secured the title. The race was followed by the prize-giving ceremony during which Breef general secretary Ghalib Al Alawi and Shaikh Nasser's Media Office director Tawfeeq Salehi honoured the top three riders in the race.

Breef first vice-president Shaikh Khalid bin Hamad Al Khalifa congratulated Shaikh Nasser on this victory and said this season promises to feature exciting competition among many new talented riders who showed outstanding performance in yesterday's race.
The next event on the federation's calendar will be a 120km National Day Championship scheduled for December 20 at the same venue.

The next event on the Breef calendar will be a 100km and 160km races on February 7 and this will be followed by the season's most prestigious competition, His Majesty King Hamad Championship in March.

The season's first night race will be held on April 3 and is for the Crown Prince Cup covering a total distance of 120km. It will be followed by the final event of the season - a 100km senior championship in the first week of May which will also be held at night.
By Steph Teeter - November 23, 2008
Email ThisBlogThis!Share to TwitterShare to FacebookShare to Pinterest
Labels: bh