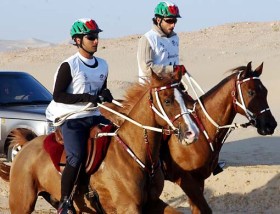 Riding 10-year-old Akab, Shaikh Hazza was in fine form as he moved ahead of a strong line-up of riders at the Boudtheib Endurance Village in Al Khatem here yesterday.

With 20 of the 59 riders who started the gruelling 240-km ride being eliminated at the end of day one, Shaikh Hazza will start off with Al Reef champion Yousef Ahmad Al Beloushi on Zara Farm Chandali in second place.