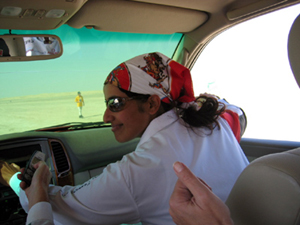 Endurance.Net is on the road, headed to United Arab Emirates.

First stop is the second race in the Al Asayl Ladies Championship Endurance Series, organized for the first time in the country by the UAE Equestrian and Racing Federation, in cooperation with the Al Asayl Endurance Centre. The first running of the 3 part series was January 19.

February 9 will be the second event in the 3 part series. Endurance.Net will be there (Steph is hoping to ride!) to cover the event and renew contact with Sheikha Madiya, who is now UAE's leading woman trainer!

Some history on Sheikha Madiya, who has come a long way in a short time:

Story from the 2004 World Endurance Championship in Dubai, UAE

On February 10th, we'll travel to the Presidents Cup for Young Riders, held at Bou Thib Endurance Village. USA riders Heather and Jennifer Stevens, Ashlee Van Raalte and Brittany Dial will be challenging the course under the supervision of Chef d'Equipe Mark Dial.

February 17 will be the long running Presidents Cup, at Emirates International Endurance Village (Al Wathba). Meg Sleeper and Sue Summers will be riding for the USA with the guidance of Chef d'Equipe Grace Ramsey.

We'll be there to take pictures and tell the story!