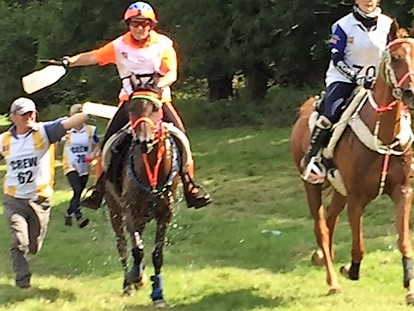 What a good weekend we’ve just had, well and truly laying the ghost of the European championships in Brussels to rest.

This was to be our last competition of the season which had always been the plan. Originally I had hoped to do a two-star with Chiara at Euston but with all the preparation for the Europeans, attention was firmly focussed on Fantom. So I made the decision to enter the one-star, to go a little faster and consolidate her experience at this level before moving up next season.

With this in mind, I introduced some sustained canter work into Chiara’s training schedule and was lucky enough to be allowed to use the stubble fields close by to do both this type of cantering and to do interval training using a sharp hill. She revelled in this type of work, getting stronger each time until I was happy with her level of fitness for our intended goal.

Because of the holiday traffic on this, the last weekend of the school summer holidays, we decided to set off early on Friday and had a straightforward journey of about seven hours to Euston Park on the Suffolk/Norfolk borders. On the journey, unlike Fantom two weeks previously, Chiara managed to demolish a large haynet, several apples and carrots and at least a few gulps of her fibre beet tea that she likes.

It was good to be back at Euston again, not having been able to compete there yet this year. Again everything was so well organised and competitors and crew alike were made to feel very welcome with excellent hospitality provided...