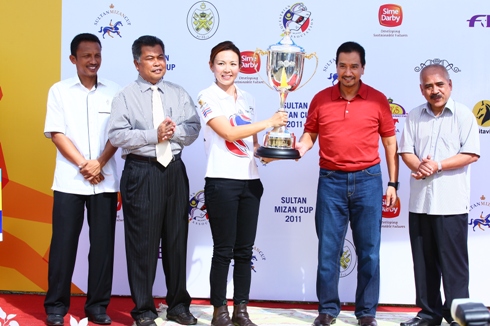 Next to finished in good condition was M. Marlon and Mohammad Fuad Hashim from the State of Terengganu Endurance Team (STET) who clock a time of 6:29:17 riding at an average speed of 18.5 km per hour. He received a tidy sum of USD14,000 as the second place winner. In third place was Zelma Lotter from South Africa riding for TMKN Equestrian on board Nashaar, who won USD10,000 after having completed in a time of 7:02:35 with an average speed of 17.04 km per hour.

The prizemoney for the 2011 Sultan Mizan Cup has been doubled that of last year. The Honourable Dato’ Seri Hj Ahmad Said, Chief Minister of Terengganu presented prizes to the fifth, fourth, third and second place winners while His Majesty, the King of Malaysia, Tuanku Mizan Zainal Abidin did the honours for the Champion of 2011 Sultan Mizan Cup as well as the winner of the Best Conditioned Horse Award.

The Honourable Chief Minister of Terengganu said, “Our vision is to make the Sultan Mizan Cup the region’s premier event and Terengganu the regional hub for the sport of endurance.”

His Majesty Tuanku Mizan Zainal Abidin riding RTES Smith, a 9-year-old gelding, was among the 53 Malaysian riders from teams across Malaysia. The other riders were from Australia, Chile, Slovakia, France, Indonesia, Singapore and Thailand.

Ian Williams, FEI Director of Endurance said, “I witnessed yet another superb competition. The ride was very tough for both the riders and horses. I must say it is a world-class event. The officials and support crew did a fantastic job. It is not easy to run an endurance ride in conditions like you have in Terengganu.

Williams also remarked that the facilities at Terengganu International Endurance Park are first-class and that it is one of the top three endurance villages in the world.