Easyboot Horse Wins The Haggin Cup at the 2010 Tevis 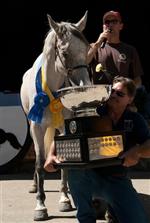 Garrett Ford rode The Fury to an impressive eighth place finish at the 2010 edition of the Tevis 100 mile race on July 24. He was accompanied by his wife, Lisa Ford, who rode Cyclone to the ninth place finsh. The Fury and Cyclone were two of 34 horses who were competing in the Tevis race as part of the Ride Tevis for Free contest sponsored by EasyCare.

The Fury also won the coveted Haggin Cup. The Haggin Cup award is intended to recognize exceptional sportsmanship and horsemanship as demonstrated by the superior condition of the contestant’s horse during and at the completion of the ride. In other endurance events, the award tends to be based almost solely on the “best condition” judging held after the Ride and focuses on the criteria of “fit to go on."

"I think of The Fury as the horse of a lifetime," said Ford. "He is eight years old and I knew when I rode him for the first time last year that there was something special about this horse. When we got into the Foresthill vet check at 75 miles, he still had so much to give. As we set out on the last leg of the race, I decided to unleash The Fury!"

John Crandell III, who took first place at the event, rode the last six miles from Lower Quarry to the Auburn Fairgrounds in 64 minutes. Garrett and Lisa Ford traveled the same distance in 47 minutes, jumping from 16th and 17th respectively to 8th and 9th place.

Haggin Cup judging observations of contestants and their mounts are made throughout the ride, beginning with the initial check-in and subsequent veterinary checks by members of the veterinary examining and Cup Committees. Findings are documented by the veterinarians and made available to Cup Committee members.

Fury's Haggin Cup win is of particular note because he is the first barefoot horse in the 54 years of the race to win the award. Garrett trains and competes The Fury in Easyboot Gloves and uses Easyboot Glue-Ons for only a few races: the 2010 edition of Tevis was one of them. 21 of the horses competing in the EasyCare Ride Tevis for Free contest went on to cross the finish line in Auburn - including the last place horses, Cira and Sonny ridden by Kathie Ford and Kathy Sherman. Six of those horses finished in the top 20 positions.

It was a red letter day for Easyboots and for the natural hoof care movement at large.
By Endurance.Net - July 27, 2010
Email ThisBlogThis!Share to TwitterShare to FacebookShare to Pinterest