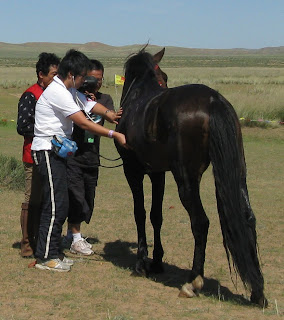 photo: the leading horse being vetted

The Long Horse Ride is a journey on horseback from Beijing to London. It is scheduled to start out shortly after the closing ceremony of the 2008 Beijing Olympics, and to arrive in London in time for the 2012 London Olympics.

The ride will bring a message of goodwill from Beijing in the Beijing Olympic year to London in the London Olympic year. It also aims to raise money for disadvantaged children through its chosen charity Schoolchildren For Children.

Starting from the China Children Charity Monument on the Great Wall at Badaling, it will cross the steppes, deserts and mountains of China and Central Asia, following the Great Wall and the ancient Silk Routes. In the path of the Mongols and Huns, it will skirt the northern shores of the Caspian and Black Seas, before the final leg through the fields and forests of Europe.

HorseNetwork.com - Full Article Liz Brown August 3, 2020 It’s August and for some of us, it’s that time of year when we’re glued to our ...