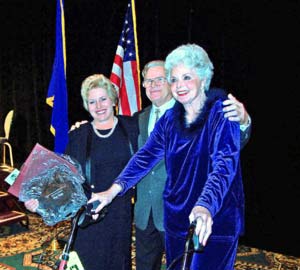 Over 1000 attendees braved a California/Nevada Winter snowstorm to assemble at the annual American Endurance Ride Conference Convention at the Silver Legacy Hotel in Reno, Nevada, February 27-29. The two-day, Trade Show and Seminar Schedule was augmented by extra days at either end for working meetings.

The combined Convention with the National American Trail Ride Conference (NATRC) was an experiment in expediency which bolstered the attendance at many events, some combined, and some totally independent. The NATRC home office felt that the combination turned out "exceptionally well", and members who have joined both organizations were thrilled to go to one Convention that covered both subjects so well.

By Endurance.Net - March 10, 2004
Email ThisBlogThis!Share to TwitterShare to FacebookShare to Pinterest
Labels: ride