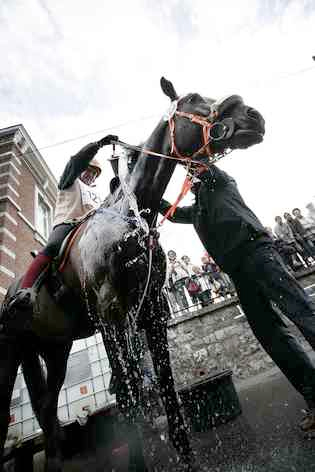 September 19 2007
In his other life as a renowned international film director Paulo Branco is known as an innovator. It was not surprising then that the vice president of the Portuguese Equestrian Federation and organiser of the 2007 European Championships would present an event that would break new ground in the sport.

Speaking on the eve of the event, he said his team’s mission had been to “recognise that the sport of endurance was gaining credibility among the other equestrian disciplines internationally but that this was the moment to push it forward still further”.

He said the benchmarks towards achieving this would focus on staging a highly competitive event in terms of participants and a challenging course, by focussing further on the safety of the horse and making a bigger impact on the public and media.
He said: “This is the direction we are heading, particularly with a new level of media coverage and we hope, the choice of a pleasant, technical and fast course in order for the riders to enjoy but also to prove their level of competitiveness.”

Sponsored by the Qatar Foundation and with the support of Turismo de Portugal, the 2007 European Championships ticked all the boxes for competitiveness with a finale that the film director himself could not have envisaged, victory, which had been firmly in the grasp of the United Arab Emirates being claimed by France just a few hundred metres from the finish line. Portugal hosted the first Open European contest jointly with Spain in 1999 at Elvas/Badahoz and it was fitting that this return to Portugal nearly a decade on produced a record line up for an Open European contest with more than 20 nations represented including the USA and Russia. Illustrating the widening reach of the sport in Eastern Europe, there were riders from Hungary and Georgia. For the first time, Greece was represented at this level. The wider than ever pool of entries from the Middle Eastern countries was a tribute to the development of the sport in that region. Alongside the United Arab Emirates came Bahrain, Qatar, Saudi Arabia and the widely popular success of the Bahrain team in securing the silver medal in the Open competition signalled not only the rapid progress of countries new to the sport at this level over the past decade but also the extent to which the endurance community internationally has bonded and embraced the achievements of those setting new standards in the sport.

The course presented by the organising team through the coastal plains close to Lisbon, was indeed fast. Not as flat as a desert track, nonetheless it was over only mildly undulating countryside with no significant climbs. Cutting through estuary country criss-crossed with rice-paddies, canals and dykes as well as pine forests and oak plantations, the track was deceptive and by no means easy. The mix of stony tracks, hard ground and deep heavy sand, required thinking, intelligent riding. The resultant ride statistics disproved any suggestion that this was anything other than a championship level course. The winning speed was an average of 19.118 km/hr, a long way from the record-breaking 2005 World Championship speed of 22km/hr in the UAE. After a long-hot summer in Southern Europe, the temperatures were not unlike those faced by riders in the Middle East and the attrition rate of 60% (average for a championship event) suggested that the humidity and climatic conditions had been a factor in some metabolic eliminations.

Several technical developments were brought in for the first time at a championship. Horses taking part were fitted with a GPS chip on their bridles to keep track of their progress. "This is the first time that a GPS system has been used in a major endurance championship and this has been done at the initiative of the Portuguese Equestrian Federation," said Hallvard Sommerseth, the Foreign Technical Delegate for the championship.

The Norwegian official, said the introduction of the GPS had been to help keep track of the runners at various stages of the competition. The move aimed to ensure the welfare of the horses as well as it will give organisers insight into how the runners were faring. The results were unanimously well received. President of the appeal committee Bo Kjellgren of Sweden said: “The use of transponders for the time keeping for the first time worked perfectly.”

He was less convinced by the use of a display system showing the pulse rates of horses in the vetgates which he said would need fine-tuning after certain “technical difficulties”.

However, efforts by the organisers to publicise the event heavily attracted thousands of spectators, not only to soak up the activity at the vetgate and dazzling display of speeds at the finish line but also the spectacle of the pre-dawn mass start. Throughout the day big screens updated the crowds on the race positions as well as fluctuating temperature and humidity. The next step surely will be the action to be relayed on a giant TV screen. Indeed, all day, helicopters circled over the leading riders as fittingly for an event organised by a film director, the 2007 championship secured the biggest live television audience for an endurance ride in the sport’s history with live coverage throughout the day on Portuguese TV as well as Dubai and Qatar TV channels. The only element of the drama that Snr Branco was unable to organise was a fairytale finish for the host nation – armchair fans and spectators at the event cheers their team into fifth place and raised the roof when Rui Pereira and his horse Canario, the first Portuguese combination appeared on the horizon to finish in 17th place. Whoever said endurance was not a spectator sport?
By Endurance.Net - September 18, 2007
Email ThisBlogThis!Share to TwitterShare to FacebookShare to Pinterest
Labels: ride