Great Britain: Bipeds Make a Horse Race Out of Contest of Man vs. Beast 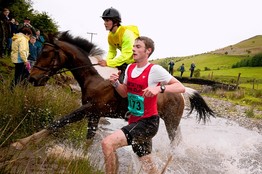 Mr. Terry stumbled. And Duke's, a 12-year-old gray mare, galloped past in hopes of taking her fourth career title in the Man Versus Horse Marathon.

The only two victories by human runners in the 32-year-old race have come in the past seven years, inspiring Mr. Terry and a record 286 fellow runners to pit themselves against 50 horses this year. Both wins came on hot days, where people have an evolutionary edge: People sweat more easily than horses because they lack the heavy horsehair.

Matching man and beast is as old as Roman gladiators fighting lions. Olympian Jesse Owens once beat a horse in a 100-yard dash...