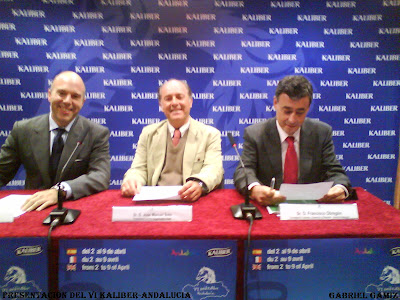 This morning in the Sicab, has presented the VI Kaliber-Andalucia, in premises of the Palace of Congresses in the Sicab.

The table was chaired by José Manuel Soto accompanied by a representation of the Junta de Andalucia and Kaliber Spain, Jose Manuel has outlined the details of this next Kaliber, which goes from the village of El Rocio, where there will be a prologue to continue to Seville and road and continue up to Antequera, where there will be a day of rest, then follow the Monumental round and finish in the emblematic city of Granada.
This year there will only be said that the participation of pairs (a horse and rider), with six stages and a rest day.

After the presentation of Kaliber, offered us some beers, where all the previous record attendance Kaliber and issues related to the horse world.

The 2011 Raid will travel 500 km in six stages through Andalusia protected enclaves, of surpassing beauty, where we can show the complicity between horse and rider

Sevilla, 24 November. A year hosts the Raid Kaliber Andalusia-Andalusia that this coming year 2011 celebrates the sixth edition. This test driven in 2006 by the Andalusian singer José Manuel Soto - passionate sportsman and horse world - has become a sports-tourism event of the first magnitude. Kaliber-Andalucía Raid resistance test is more demanding horses and horse racing longest and toughest in the world. This year divided into 6 stages and 500 kilometers tests speed, endurance and skill of both horse and rider.

Kaliber-Andalucía Raid congregate each year to national and international riders not only participate in a unique sporting event, but, in turn, discover the beauty of Andalusia and its people. It's more than a competition, as it not only offers a sporting challenge against the clock if it is discovered, trot, nature and culture of Andalusia. And in the Raid is not there first, but to go by dosing the horse and keeping it at an appropriate pace for each stage.

The racetrack is developed through many different routes, where horse and rider show their complicity face different types of soil with natural obstacles that complicate the path. The Raid runs through Andalusia protected enclaves of surpassing beauty. Each stage of the Raid-Andalucía Kaliber usually consists of 40 km, existing veterinary controls to check the pulse of the horse at the end of each. In this control the clock is ticking until the horse is not below 65 beats. At night, horses and riders, hard day's rest to recover to face with the dawn a new era.

Like every year the tour Raid-Andalucía Kaliber change your route and the sixth edition will start on April 2 and ends at the Dew 7 days in Granada. The Raid will this year with a prologue about 25 miles, starting and finishing at the Dew. As news, the Raid VI consist of 6 stages, each of 60 km - divided into two phases which is 30km from a veterinary and a break of 45 minutes. Furthermore, this edition will be most competitive and exciting, if possible, as it disappears more equipment and will result only in the category of biomes (a rider, a horse). The Raid VI-Andalucía Kaliber will kick pictorial touring places like the National Park of Doñana Natural Park Sierra de Grazalema, Zahara de la Sierra, etc. A magical race between Dew and Granada from Seville, Villamartin, Ronda, Antequera and Alhama de Granada.

2 to 9 April all equestrians have an appointment in Andalusia-Andalusia Kaliber Raid VI. This competition attracts both participants and spectators and allowing them to discover wild landscapes in all its glory, as spring begins to bloom Andalusian fields. The world's most beautiful race, noted for its hardness, its magic and beauty. The fact go and enjoy the scenery makes it worthwhile participation.

José Manuel Soto (March 12, 1961, Seville) is a singer known for his melodic songs. The fourth of nine children, was born into an affluent middle class family with close links to rural environment. His first hit song, and possibly gave him more fame was "For Ella," the author's own composition. In 1989 with the song "Like a Light" got second in the OTI festival. In the first half of the 90 returned to get a new hit with the song "Let yourself be loved." With 16 albums in the street and more than 1,000 concerts, combines a singer with his other passion is horses.

He is currently the president and creator of Raid Kaliber-Andalusia. This great event comes from Jose Manuel Soto passion for horses and the land where he was born and raised, Ontario. With this unique event in the world wants Andalusia is a world leader in the equestrian discipline of resistance. Teach everyone the rich landscape, environmental and cultural to account Andalusia. In the same way you create a unique sporting event and world reference Spanish label.

More photos and information:
http://ggjineteraid.blogspot.com/
By Endurance.Net - November 24, 2010
Email ThisBlogThis!Share to TwitterShare to FacebookShare to Pinterest