The 2008 FEI World Endurance Championship Trial run was held last weekend at Terengganu, on the East coast of Malaysia. The Championship had been provisionally granted to the Malaysian Equestrian Federation subject to there being a number of successful trial runs held in 2006 and 2007. 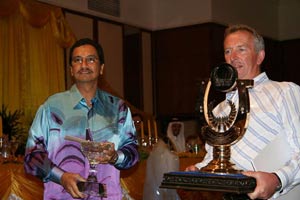 HRH Sultan Mizan Zainal Abidin invited several of the world's top riders to participate in the event to demonstrate the quality of the venue for the pending 2008 World Endurance Championship. The International riders were to ride horses of the Royal Terengganu Endurance Stable, and were to draw on their skill and experience to test the suitability of a tropical venue for a World Championship event.

New Zealand riders Kevin James and Paul Jeffrey were among the International competitors. James successfully completed the 160km CEI*** event on a horse from the Royal Terengganu Endurance Stable. He was among the 13 competitors who completed the 160km course, resulting in a 57% completion rate for the event, and finish times far faster than had been anticipated.

Jeffrey navigated the 7 yr old gelding Jakim Zane to a 1st place finish and Best Condition award, setting a Malaysian record for fastest finish time on an 80km course. Australian rider Brook Sample also tested the 160km course but his horse, also from the Royal Stable, was eliminated for back soreness at the 120km point. 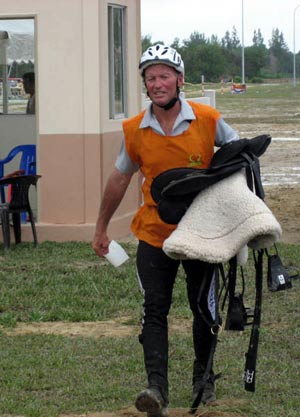 The Malaysian Equestrian Federation, together with the Organising Committee (OC) - the State Government of Terengganu and Yayasan Kebajikan Perkasa Alam Terengganu, invited a number of leading Malaysian riders as well as riders from America, Europe and Australsia.

A detailed report is being produced; it will be submitted to the FEI Endurance Techncial Committee for further consideration but Dr Hallvard Sommerseth expressed his appreciation for the commitment made by the organizers in producing a very successful trial run.

The FEI Endurance Committee had required the trial run to be held at the proposed venue on a date to match the date of the 2008 Championship and for there to be a minimum completion rate of 40% and a maximum riding time of 16 hours for the 160km distance.

A total of 23 horses were presented at the start of the event and 60% completed the full distance well within the maximum ride time allowed. All of the horses performed well with no heat and humidity related problems.

Dr Jim Bryant confirmed that the horses had competed well under the conditions which had been relatively cool because of the timing of the event within the monsoon period. He commented that all of the riders had taken great care to compete using all of their horsemanship skills. Dr Bryant linked the performances of the riders and horses to a time within Endurance when events were less about speed and more about the combination of rider and horse working in close harmony together to overcome the challenges presented.

Mr John Robertson felt that there were certain areas which needed to be reviewed in relation to the overall management of the event. He confirmed that the OC was aware of these issues but he was confident that the OC would be able to solve them ahead of the Championship.

Dr Sommerseth confirmed that the next trial event, scheduled to take place in the first half of 2007, would involve the use of overseas based horses who would travel to Malaysia to test out the facilities and also to fully evaluate the timing required to allow overseas horse to acclimatise properly ahead of competition.

A team from FEI Television attended the event and will produce a short documentary to be shown at the planned FEI World Endurance Forum planned for March 2007.