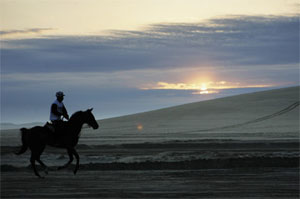 Two individual Qatari riders arrived ahead of the field in the desert, as the convoy went past its first check point in the equestrian endurance event – a 120km race over sand.
The first arrival clocked in at just under 84 minutes, 30km after the start. Saoud Al Marri, riding Nu Piece, and Mohammad Atta on Proavodo held a slight lead ahead of a group of 10 riders representing Qatar, Bahrain and United Arab Emirates in what has been a Middle Eastern-dominated race so far.
Fifty one horses headed out into the desert after a mass start at 06:00 in the dawn light. Heavy overnight rainfall has made the track difficult and heavy. Team coaches and veterinarians say they expect problems in the later stages of the gruelling race on Thursday 14 December.
Bahrain are the next best placed team. Their first rider making the first mark was Ahmed Hamad Saleh Al Rowaiei on Lormar Lorraine. Second for Bahrain was Sheikh Nasser Bin Hamad Bin Isa Al Khalifa on the grey gelding Shar Rushkin.
The race was always expected to be dominated by countries and regions from from the Middle East. Korea and Malaysia are the only teams outside the Middle East with competitors in the event.
Korea are competing on Qatari horses. The only true non-Arabic combination is Malaysia's Bin Muhammad Rahman Azman riding Colorado, a horse brought over especially from Malaysia for this marathon through the desert. But they have found the going tough and were more than 20 minutes behind the leaders at the fist checkpoint.
Bahrain comes full force with three members from the ruling family. Sheikh Duaij Salman Mubarak Al Khalifa finished ninth at the 2006 World Equestrian Games in Aachen, Germany. Sheikh Nasser Bin Hamad Al Khalifa from Bahrain came 14th. The third is Sheikh Nasser Bin Al Khalifa on Shar Rushkin.
United Arab Emirates are represented by four members of the ruling Al Maktoum family, with HH Sheikh Rashid Bin Mohammed Al Maktoum being the oldest at 25. The youngest, HH Sheikh Ahmed Bin Mohammed Al Maktoum, aged 19, won the title at the 2002 World Equestrian Games in Jerez, Spain, where endurance racing was introduced over a distance of 160km.
15th Asian Games, Doha 2006
HULIQ.com
By Steph - December 14, 2006
Email ThisBlogThis!Share to TwitterShare to FacebookShare to Pinterest