Merri and I are now at the TRH Motilla Hotel, in Dos Hermanas, just outside of Sevilla (Seville). We had a late dinner last night at the Hotel Occidental in Sevilla (11pm, just before the closed) and then totally crashed around 1am. The first real sleep since we left Oreana, we didn't come alive again until 11am the next day!

We had lunch at the hotel (too late for breakfast) and did some last minute shopping - a phone card for Merri, a book on Andalucia, cash at the ATM, and then gathered our maletas muchas pesadas [very heavy suitcases!] and took another taxi to the next stop at Dos Hermanas.

I spoke with Paco a couple times today - he's been driving the new van from Madrid to go pick up his horses and bring them here this evening (I think) or perhaps tomorrow morning. I haven't had a lot of quality communication with him, just short conversations in Spanish-accented English and/or English-accented Spanish on a cellphone from inside a truck - which has left me with a little bit of information, and a bit of wondering... but I think it's all going to work out :)

Registration and vetting begins March 28 at the Betis Stadium (soccer), meetings and press and final entries in the early afternoon. 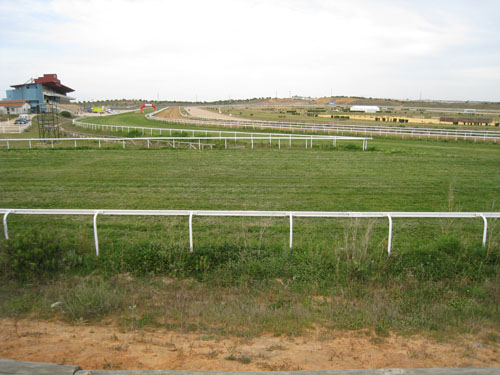 And then at 4pm all of the riders will do a 10km (6 mi) run/ride around the stadium (I wonder how many laps that is) for opening ceremonies - there will be a lot of press, tv, etc.

This is a very big deal, well organized, high profile event here. Merri said, 'Great, so all the horses will gallop around the track together and the riders that can stay on get to start the next morning'. It does conjure up some interesting images... I guess the photos will tell all. 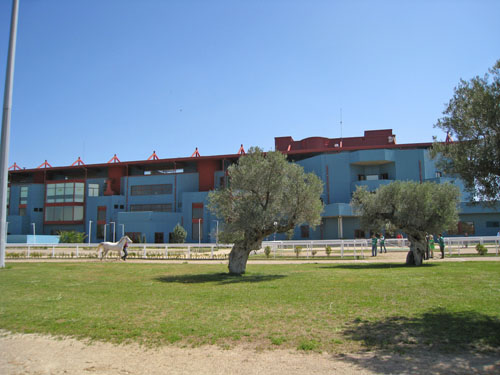 March 29 will be the start, from Mairena del Aljarafe (outside Sevilla) to El Rocio, located near the Parque Nacional de Donana - a large estuary along the Rio Gualdalquivir.

The weather was gorgeous today - a high of 76, nice breeze, mostly sunny with a few spring clouds drifting by. 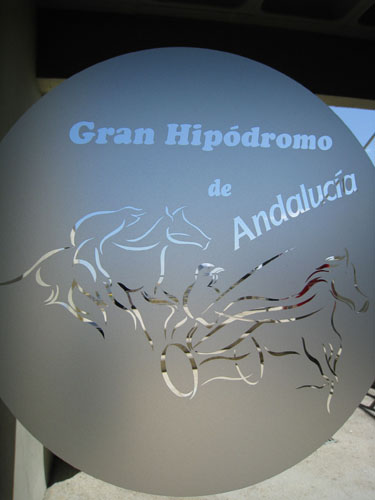 (from http://www.andalucia.com/cities/sevilla.htm ) "According to legend, Sevilla was founded by Hercules and its origins are linked with the Tartessian civilisation. It was called Hispalis under the Romans and Isbiliya with the Moors. Its high point in its history was following the discovery of America.
Sevilla lies on the banks of the Guadalquivir and is one of the largest historical centres in Europe, it has the minaret of La Giralda, the cathedral (one of the largest in Christendom), and the Alcazar Palace. Part of its treasure include Casa de Pilatos, Torre del Oro, the Town Hall, Archive of the Indies (where the historical records of the American continent are kept), the Fine Arts Museum (the second largest picture gallery in Spain) , plus convents, parish churches and palaces.

For all its important monuments and fascinating history, Sevilla is universally famous for being a joyous town. While the Sevillians are known for their wit and sparkle, the city itself is striking for its vitality. It is the largest town in Southern Spain, the city of Carmen, Don Juan and Figaro.

The Sevillians are great actors and put on an extraordinary performance at their annual Feria de Abril, a week-long party of drink, food and dance which takes place day and night in more than a thousand especially mounted tents. But above all it allows the men to parade on their fine horses and the women to dance in brilliantly coloured gypsy dresses.

Immediately before that is Holy Week, Semana Santa, a religious festival where hooded penitents march In long processions followed by huge baroque floats on which sit Images of the Virgin or Christ, surrounded by cheerful crowds. Both Spring events are well worth experiencing."

Gastronomy
Seville is a gastronomic centre, with a cuisine based on the products of the surrounding provinces, including seafood from Cadiz, olive oil from Jaen, and sherry from Jerez de la Frontera.
The tapas scene is one of the main cultural attractions of the city: people go from one bar to another enjoying small dishes called tapas (literally "lids" or "covers" in Spanish, referring to their origin as snacks served in small plates used to cover drinks.)

Typical sweet cakes of this province are polvorones and mantecados from the town of Estepa, a kind of shortcake made with almonds, sugar and lard; Pestinos, a honey-coated sweet fritter; Roscos fritos, deep-fried sugar-coated ring doughnuts; magdalenas or fairy cakes; yemas de San Leandro, which provide the city's convents with a source of revenue, and Tortas de aceite, a thin sugar-coated cake made with olive oil.

Except for "polvorones" and "mantecados", which are traditional Christmas products, all of these are consumed throughout the year. The Seville oranges that dot the city landscape, too sour for modern tastes, are commonly used to make marmalade.

Flamenco and Sevillana
The Sevillana dance, commonly presented as flamenco, is not thought to be of Sevillan origin. But the folksongs called Sevillanas are authentically Sevillan, as is the four-part dance that goes with them.

Seville, and most significantly the traditionally barrio, Triana, was a major centre in the development of flamenco.

Part I: The Travels is here