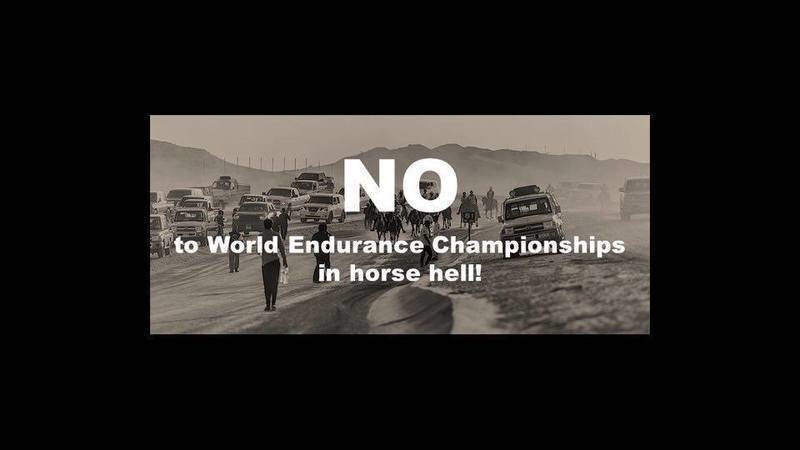 Owing to the most recent endurance debacles in Dubai, UAE, a petition has sprung up and circulated on the internet to remove the 2016 World Endurance Championships from Dubai, and have them "staged in a country which upholds the values of Clean Endurance."

The controversy involving the UAE over endurance horse welfare, cheating, horse swapping in mid-race, and more, has continued for 3 years and outraged people from around the world.

FEI suspended the UAE at the end of last year's endurance racing season, warning them to clean up the abuses. UAE was reinstated at the beginning of this year's racing season, yet the abuses and horse deaths continue, with the latest debacle coming from the finish of a Junior/Young Rider Endurance Cup where 3 of the first finishers were disqualified for overriding and beating their exhausted horses, and grooms ran onto the track to haze them. All was caught on the live video stream of the race.

The FEI has taken rather quick action to suspend races in the UAE for the next few days, but it is not enough action for the endurance world outside Group VII, since this same action last season proved to have little effect in ultimately protecting horse welfare in endurance races in Dubai. This petition, started by Clean Endurance, targets the World Endurance Championship in Dubai in December 2016.

"The 2016 World Endurance Championships have been awarded to Dubai despite the fact that horses continue to suffer or die at every endurance competition there. Despite the UAE's previous suspension for abuse and cheating, horse welfare has not been improved. Please sign if you agree the World Endurance Championships, scheduled for December 2016, should be removed from Dubai and staged in a country which upholds the values of Clean Endurance."