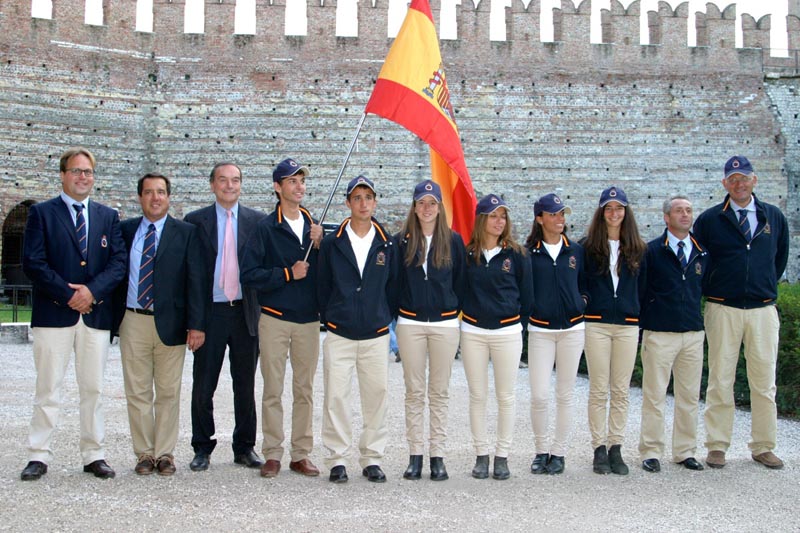 Spain has won the double gold at European Championships Junior and Young Riders Endurance 2014 Championship in Verona (Italy), last Saturday July 12, about 120 km in 5 phases, led by Catalan coach Ignacio Casas. Starring the magnificent Spanish junior team raid in the European Championship 2014, where the five pairs were classified Spaniards and got the Gold Medal Team and Individual Gold Medals and Bronze.

From the first kilometers Gil Berenguer, riding NINA-BIN-MENFIS and Paula Muntala, riding a SHAGYA-IRISZ, were in the lead group with the best French, Italian and Belgians, rolling above 18 km / h medium. Over the kilometers the lead group slowly fell apart, for eliminations in some cases, and lack of reserves in others.

Then came the last vetgate where only three remained in the lead, the two Spaniards and French rider Nina Lissarrague, riding AINHOA-CATHARISSIME. In the final phase Gil Berenguer and NINA-BIN-MENFIS shot at over 27 km / h to be crowned 2014 Junior & Young Rider European Champions, arriving with a lead of over two minutes. Lissarrague was second while 1 minute after arrived Paula Muntala and SHAGYA-IRISZ to clinch the bronze medal.

Besides these Medals obtained in competition, the jury awarded him test the Spanish Team Special Prize for Elegance, for exemplary Starring throughout the Championship, both in career and in the days before and after cohabitation.

Another great international success of the Spanish Raid. Congratulations to amazon, riders, owners and coaching staff!