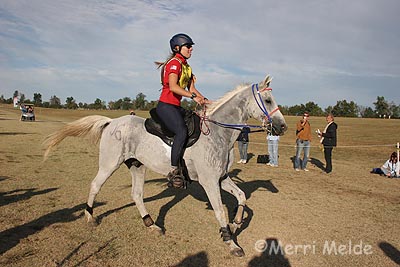 It's a good thing for Heather Reynolds and the 2014 USA Endurance Team that Chanses didn't make it as a racehorse. "He was really fast, but he would just look around, rather than race," Heather says. "He's really laid back, a super relaxed horse. He can turn it on when he needs to. When asked to do it, he'll do it. He's just not going to volunteer," she laughs.

Now owned by Heather and husband Jeremy Reynolds who make up Reynolds Racing, and partner Skip Lightfoot, the Reynolds obtained the "cool looking" 9-year-old bay Arabian gelding in 2012 just 15 minutes down the road from their place in Dunellon, Florida. "We were short on horses at the time, and our friend Lynn Ashby recommended him to us. We usually take her word pretty seriously."

That Chanses happened to be a half brother to Jeremy Reynolds' 2012 World Endurance Championship ride in Great Britain, A Kutt Above (they finished 21st), was an added bonus. Both horses are by the sire Patriot Missle.

Chanses had already done a season of endurance rides with previous owner Severiano Martinez, so he was ready to go when the Reynolds bought him and started riding him on the trails. After doing 5 rides in 2012 (including a 25 with co-owner Skip Lightfoot aboard), which featured a win and Best Condition in the Ft Howes 160-km FEI ride, Chanses stepped up in his training and performances. The 16-hand gelding won 1st place and Best Condition in the 50-mile Gator Run with Heather in January, won 1st place and Best Condition in the 75-mile Broxton Bridge with Jeremy in February; and after 3 consecutive pulls for lameness in 100-mile rides in March (after a fall on course), May and July (Tevis, pulled at the Lower Quarry at 96 miles), the gelding finished first in the 100-mile New Mexico Desert Classic Pioneer with Heather in October. After he won his next start, the January 100-mile Broxton Bridge with Heather, the Reynolds knew they had a possible USA WEG Team contender in the gelding.

After the challenging USA Team Trial April 18-19 in Ehrhardt, South Carolina and a number of exhaustive pre-ride and post-ride veterinary inspections, Heather and Chanses topped the USA Team Shortlist that was announced on June 19th for the World Endurance Championship at the Alltech FEI World Equestrian Games in Normandy, France.

A long-time AERC endurance rider (she started as a Junior at age 11), 37-year-old Heather has over 18,000 endurance miles, including 4 Tevis buckles, a Tevis Cup win and 2 Haggin Cups (Best Condition at Tevis), and extensive international experience. This will be Heather's fourth time on a World Championship Endurance team, having competed in Jerez, Spain, in 2002; Kentucky, USA, in 2010, and Great Britain, in 2012. 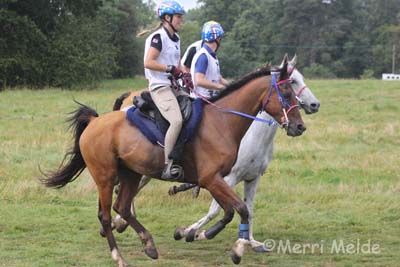 As a 25-year-old on the World Championship team in Spain, Heather left a big impression on her roommate and teammate Bev Gray, even after her horse Crystal's Charm was unexpectedly pulled at the first vet check for lameness. "Heather immediately got out and started helping the rest of the teammates, and cheering along the course. She's a pro. A career pro," Bev said. "She's my friend; those are memorable times that I'll never ever forget - the bonding we had, and the fun."

Heather is known being humorous in almost any situation, and for being cool under pressure. Chanses will probably retain his cool in the August 28th 160-km race, seeing as he's so relaxed. "I think it will work out great in the herd dynamic overseas, because he's so laid back," Heather says. "He won't end up wasting a bunch of energy the first couple of loops. I don't think he'll get his panties in a bunch."

Heather thinks the USA Team's prospects of winning a team medal in France are "super strong. This is probably the best team the US has ever had. I think that the group dynamic is awesome. And Emmett [US Chef d'Equipe Emmett Ross] has put us through the ringer as far as soundness and the scrutiny on the horse itself. It's been a much higher standard than the past, so I think our odds of arriving at the starting line with sound horses is higher than usual. And everyone that has been selected has amazing backgrounds and their horses have great records, so if luck joins us, I think our team will do amazingly well." She laughs and slightly amends her statement, "If the Horse Gods let the horses arrive on French soil unscathed, we'll be good!"

Bev Gray concurs, "The growth that you see from Heather since Spain, to Normandy, is dramatic. She's a professional, and she's going to do the USA a fabulous job."