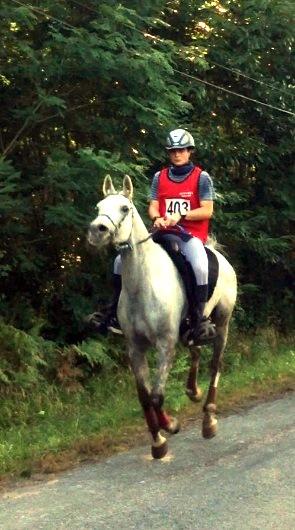 Good results of the binomial Spanish in Monpazier Equestrian Raid (FRA). Test run on this past weekend, on 30, September 31 and August 1, where we have run a series of tests CIS.

This is the chronicle of Equestrian:

Oier Etxenike completed a superb weekend in Monpazier: Friday was fifth in the CEI2 * riding "Hodei", while Saturday won the CIS * with "Foque de Quijas”". In the various French tests dozens of Spanish competed.

The test was won by the Emirati Rashid Mohd Ibrahim Al Baloushi, who made an average of 20.26 kms. / Hr. with the horse Extremadura "Bucanero". Besides Etxenike, which last year was second in this race with "Farad", were classified four Spanish: Ander Mato (23 º with "Kin"), Aiora Urkiaga (29th with "Hiaben"), Olatz Areitio (30th with "Ainhoa ​​Catharilis") and Miguel Astiz (40 ° on "Lan Bugati").

The CIS3 * (39 classified 66 participants) was won by Cecile Totain locally, with the former Alex Luque mare "Koheilan Kincso" (18.45 kms. / Hr.). Eulalia Gonzalez also qualified in this test, it was 14th on "Gazal Biborka". Laia and Agda Muixí were 25th and 26th with "Tbo Rematador" and "Vaincre Kossack" respectively, while Rachel Pratcorona was 32nd ("Erika"), and Xabier Aitor Unanue, 34 ("Ab-Zita").

Click on the following link to view the results: CIS Monpazier."