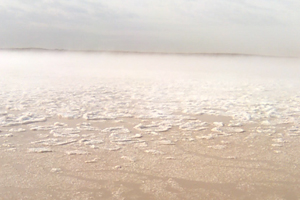 A violent thunderstorm brought wind and hail to the Dubai Endurance City during the Dubai Crown Prince Cup. The violent storm scattered over 40 frightened horses across the desert, some were recovered over 20 kilometers from the Endurance City. A blanket of hail covered the land.
photos submitted by K. Hasan
From the Telegraph.co.uk:
"On Thursday, one of the week’s landmark events, the endurance race in the desert, was called off not long after it started. A total of 40 horses went missing, helicopters were called in to round them up, and several riders suffered injury. So ferocious was the storm that car windows were smashed by hail, which lashed the area in the morning. At least one rider was taken to hospital. " 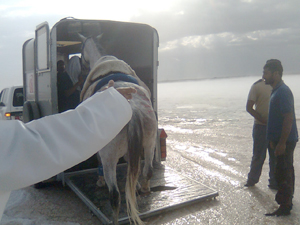 The two rides got under way as scheduled at 6am, but had to be called off due to heavy rain and hail.

Participants in the main ride had completed the first loop, while the smaller ride competitors were about to commence their race when the skies opened up.

The Dubai Crown Prince Endurance Cup FEI CEI 2-Star 120km endurance ride that was scheduled to be an inter-stables competition with each of the 20-odd major stables in the UAE, allowed a field of a maximum of four riders or a minimum of three. The Shaikh Hamdan Bin Mohammad Al Maktoum Challenge, a CEN 102km endurance ride, was restricted to private stables and individuals so as to give them a better platform to qualify for the bigger events.
By Endurance.Net - March 27, 2009
Email ThisBlogThis!Share to TwitterShare to FacebookShare to Pinterest