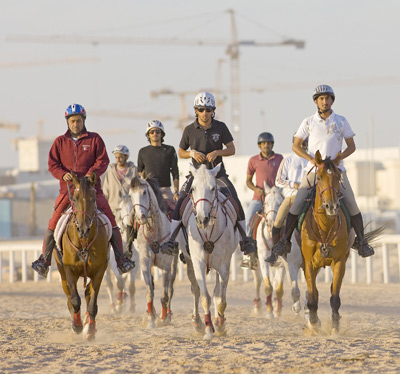 March 19, 2009
Doha, Qatar -- The Al Shaqab Endurance Team will enter a total of 19 riders in the prestigious Emir’s Cup Endurance Race that will be held Saturday, 21st March at the Qatar Endurance Village in Mesaeed near Sealine Beach.

The Emir’s Cup is the highlight of the Qatar Endurance season and entails winning purses of over QR 1,000,000. The Cup will have a 100km race for Junior-age riders and a 120km race for Senior entrants. Al Shaqab will have twelve Senior entrants and seven Junior riders.

As one of the fastest growing international equestrian events, endurance racing consists of varied terrain through a course in the desert. There are mandatory check points where all horses must pass a veterinary inspection, including tests for heart rate, respiratory abilities and dehydration. A horse must pass the inspection to continue on to the next check point, including a final inspection at the end of the race to clock an official time. Any horse that does not pass a test in the check point, or is considered lame, is eliminated from the race.

By Endurance.Net - March 19, 2009
Email ThisBlogThis!Share to TwitterShare to FacebookShare to Pinterest