The 10th Running of the His Highness the President of the UAE Endurance Cup FEI CEI*** 160 km will be held at the Emirates International Endurance Village, Al Wathba, Abu Dhabi on February 14, 2009. 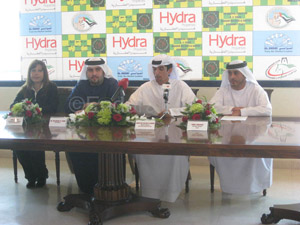 The race is sponsored by Hydra Properties, Shaikh Mansoor Bin Zayed Al Nahyan's Al Wathba breeding stables of Normandy, France, and Al Awani General Enterprises Establishment, whose support for equestrian activities in general and endurance races in particular is an integrated partnership between the economic and sport sectors of the UAE.

Gulf News article: President's Cup winners will ride away with Dh1.5m and cars
Abu Dhabi: A whopping Dh1.5 million and four cars are up for grabs in the President's Cup 160-km endurance ride to be held at the Emirates International Endurance Village in Al Wathba tomorrow.
An amount of 1.5 million AED has been allocated as cash prizes and will be distributed to all riders who complete the race. In addition, four cars will be awarded as prizes to the 1st, 2nd, and 3rd places, and for Best Conditioned Horse.

The race begins at 6 AM.