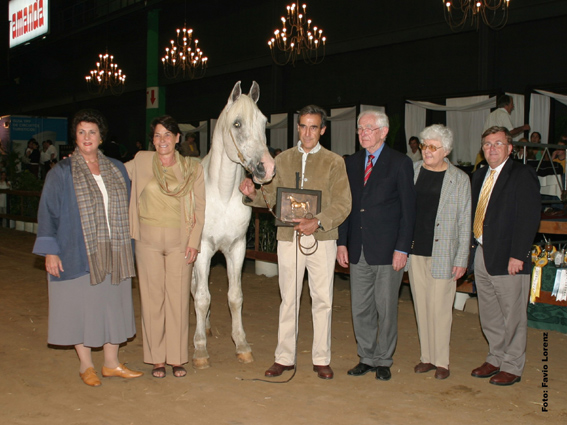 
FUGITIVO received on April 8 of 2006 the WAHO TROPHY as the most outstanding Arab Horse bred and living in Argentina.

This very special Trophy was created by the WAHO (World Arabian Horse Organization) Executive Committee and aims to distinguish an exceptional horse in each Country who has an Arab Horse Registry recognized by WAHO.

Is the National Arab Horse Society in each Country who selects the distinguish horse for this award.

The Argentina Arab Horse Breeders Society took the decision after evaluating all candidates who's CV were submitted by owners and breeders to nominate FUGITIVO the recipient of this award.

The Award was presented with the presence of FUGITIVO and his breeders and owners, Celina & Miguel Pavlovsky from Haras San Andres del Moro. It took place during the Argentina National Horse Show this April at Palermo Show Grounds and the Trophy was presented by the President of WAHO Dr. Hans J. Nagel (Germany) and members of the Board, Mrs. Claudia Caraballo de Quentin (Argentina), Mrs. Izabella Pawelec-Zawadzka (Poland) and Mr. Peter J. Pond (Australia).

FUGITIVO is an Arab stallion born in April 1.980, his mother Fuga came from old Argentine lines and his father was imported from the U.K. of Crabbet origins. During his long 12 years of active competitions he won National Championships in Dressage, Jumping, Driving, Barrel Racing, Pole Racing and in Ridden Classes with English saddle and Gaucho Saddle. He won the Senior Championship in Halter.

In Open Championship (for all breeds) he won National Titles in Barrel & Pole Racing. He competed in Flat Races and won in Endurance Competitions. He is the most versatile winner of performance competition in Argentina and had passed to his sons and grand sons his successful competitive spirit. His sons had been winners in the Race Track with Horse of the Year Awards, and were very successful in Endurance Competition with more than 20 sons exported as successful endurance horses. Fugitivo also as a Maternal Grand Father continue transmitting his athletic conditions. In the last 3 years The Endurance Argentine National Championship were won by his grandsons. In the 2.004 National Championship the four first have FUGITIVO as a Father or Maternal Grand Father. FUGITIVO in good shape despite his 26 y.o. left his pasture as a recent retired stallion did a long travel to Buenos Aires to receive with honors this unique WAHO Trophy.

By Steph - April 13, 2006
Email ThisBlogThis!Share to TwitterShare to FacebookShare to Pinterest