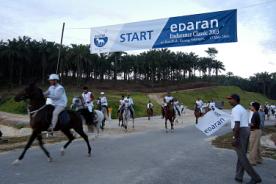 Edaran Endurance Classic 2005, as with the first two Endurance Classic events, will be held at the tranquil and picturesque setting of ar-Raudhah Equine Centre in Kuang, Selangor, just 40 minutes north of Kuala Lumpur , Malaysia.

For the first time, Edaran Endurance Classic has opened the competition to international participants with the aim of creating greater international awareness of Malaysia as an endurance riding venue as well as to further elevate the status of the sport in Malaysia. The Edaran Endurance Classic 2005 anticipates Riders from United States of America, United Arab Emirates, Australia and Germany. From within the country, at least 100 participants including the HRH (Duli Yang Maha Mulia) Al-Sultan Mizan Zainal Abidin of Terengganu, an avid and keen endurance rider, are expected to take part in this year?s competition.

The Edaran Endurance Classic 2005 will stretch over three days from 20 May till 22 May, starting with veterinary checks of the horses and technical briefing to participants on Friday, 20 May.

?Endurance riding is a relatively under-exposed equestrian sport in Malaysia. Compared to the more visible and popularly promoted equine sports of Polo, Dressage and Show Jumping, endurance riding has yet to gain awareness among our younger Malaysians. Edaran Endurance Classic was initiated with the aim of promoting and developing the sport to a level where it can bring tangible benefits to the country and to our potential endurance sportsmen and women,? said Dato? Haji Abdul Hamid Mustapha, a Director of Edaran Digital Systems Berhad (EDARAN) and Organising Chairman of the Event.

Recognising the sport?s potential we have, with the support and help of Equestrian Association of Malaysia, introduced for the first time, an event for Young Riders. The Young Riders? 15Km Ride will serve to encourage endurance enthusiasts to pick up the sport early and grow with it. Endurance riding is one equestrian sport that holds tremendous potential for Malaysia. We believe it is one sport in which Malaysians can excel in, given that we have ideal sites and venues for training in the sport. Apart from that, we also believe that endurance riding can contribute significantly to sports tourism,? added Dato? Hamid Mustapha.