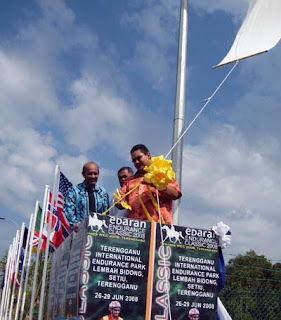 The Edaran Endurance Classic 2008 held at the Terengganu International Endurance Park, the venue of the forthcoming World Endurance Championship 2008 in Terengganu, ended 29 June 2008 with 8 successful completions out of 18 starters in the CEI 3* 160KM ride category. Of the 8 completions, 6 obtained their Certificate of Competency (COC).

[More ...]
By Endurance.Net - July 05, 2008
Email ThisBlogThis!Share to TwitterShare to FacebookShare to Pinterest

HorseNetwork.com - Full Article Liz Brown August 3, 2020 It’s August and for some of us, it’s that time of year when we’re glued to our ...